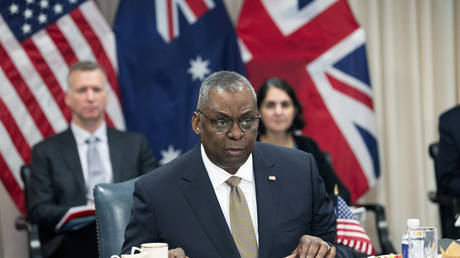 US Defense Secretary Lloyd Austin said major progress has been made on plans to provide Australia with nuclear-powered submarines, part of an agreement struck last year with Canberra and London to form a trilateral security bloc largely aimed at confronting China.

Speaking after meetings with Australian Deputy Prime Minister Richard Marles, who also serves as defense minister, and UK Defense Secretary Ben Wallace, Austin said Washington would make good on its pledge to furnish the subs to its ally.

“The United States is committed to ensuring that Australia acquires this capability at the earliest possible date,” he said on Wednesday.

Marles said there is “an enormous sense of shared mission and momentum across all three countries,” noting that the US rarely shares such nuclear technology, even with close allies.

“The significance of that step shouldn’t be lost on people – there’s only been one occasion where a country has shared that capability with another and that was the United States with the United Kingdom a long time ago,” Marles added. 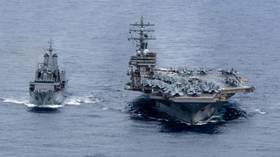 The UK’s defense minister went on to declare the first AUKUS meeting as a “landmark moment,” adding that the officials also discussed “advanced capabilities” including hypersonic weapons, undersea intelligence and surveillance and reconnaissance.

Though the defense officials did not mention Beijing in their latest statements, all three countries have repeatedly warned of the alleged threat posed by China in the Indo-Pacific. A day before the AUKUS meeting, Austin accused Beijing of undermining regional “peace and stability,” and announced that the US military would soon expand its presence in Australia.

Moscow has previously echoed similar warnings about the three-way security pact, with Defense Minister Sergey Shoigu saying the bloc could “detonate” the entire Asia-Pacific region in comments last summer, adding that it will likely become “a military-political alliance.” (RT)