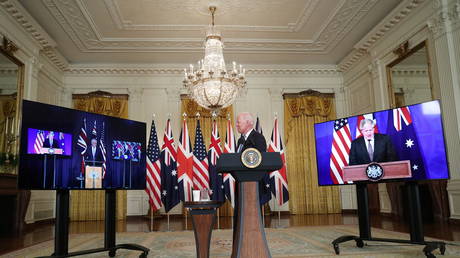 America’s Asia security head has admitted that the AUKUS pact, which includes the sale of nuclear-powered submarines to Australia, was created to counter China in the Indo-Pacific.

Speaking on Wednesday, Kurt Campbell, the US coordinator for Indo-Pacific affairs on the National Security Council, told an audience at the Lowy Institute, a Sydney-based international policy think tank, that AUKUS was more about taking a stand against China, than technology sharing. (RT)

Intensive snowfall in Istanbul, Turkey, hinders traffic and pedestrian movement in many parts of the…

Armenian President Armen Sarkissian, who announced his resignation two days ago, is a citizen of…

Heavy snowfall has blanketed Istanbul as officials issued warnings on road safety, according to Daily…

11:26 Azerbaijan to meet 93% of Georgia’s demand for natural gas this year

10:55 ‘I am extremely happy to be back in my native city after 30 years’ – Shusha resident

20:13 Azerbaijani agency receives 945 applications from businesses to set up businesses in Karabakh

19:43 Nearly 300 Armenians put on wanted list for crimes against Azerbaijanis

18:26 The Japanese soldier who never surrendered

17:40 Resignation of Armenian president – Purge of government from Serzh’s entourage

16:52 All flights at Istanbul Airport canceled amid heavy snowfall

15:47 Ukraine may use Romania for transit of Azerbaijani gas

15:46 France evacuating its diplomats from Ukraine

15:43 Government nortgage lending up by 38% in Azerbaijan