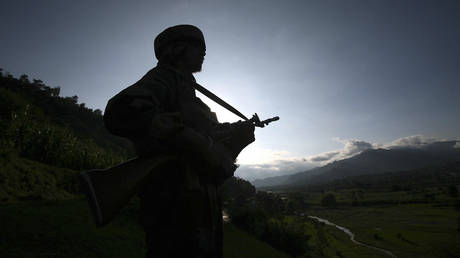 An Indian army soldier stands guard while patrolling near the Line of Control, a ceasefire line dividing Kashmir between India and Pakistan, in Poonch district August 7, 2013. © Reuters / Mukesh Gupta

Gun battles breaking out in Indian Kashmir in a mountain pass dividing the disputed Himalayan territory with Pakistan have resulted in the death of at least five soldiers and two militants in the deadliest attack since February.

On Monday, Colonel Devender Anand announced that “One JCO [junior commissioned officer] and four soldiers were killed during a search operation probably by infiltrators… The operation is ongoing.”

Anand added that they had been transferred to a local medical facility but died from their injuries.

Two militants were also killed, with security forces in the north of the region shooting dead a suspected militant from the Resistance Front, which Indian police assert is the Pakistan-backed group responsible for a string of civilian assassinations. Another was killed in a gun battle in the south.

The shootings mark the deadliest incident since Pakistan and India, who have claimed the contested region and controlled parts of it since their independence, signed a ceasefire in February. (RT)