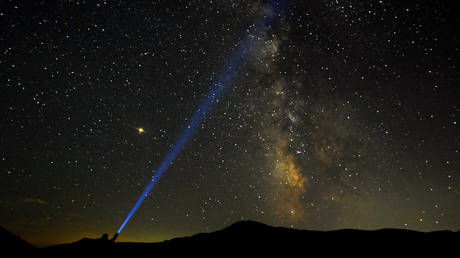 A man points his light at the Milky Way during the peak of the meteor shower. © Reuters / OgnenTeofilovski

A group of international scientists has found a previously unknown “ancient stellar population” with rather unusual properties hiding in plain sight – right in the center of our galaxy.

This large group of stars likely originated as a globular cluster somewhere in the Milky Way and drifted to its middle long ago, they said. The discovery was detailed in two papers, published in the Astrophysical Journal Letters on Monday.

The astronomers said that they came across the star cluster as they were studying a massive black hole that lies at the core of our galaxy. It’s surrounded by one of the densest fields of stars in the known universe, consisting of some 20 million celestial bodies.

However, this so-called ‘Nuclear Star Cluster’ (NSC) is pretty difficult to observe due to it being covered by dust clouds that block visible light. So, despite its dense star population, the area appears dark when looked upon from the outside.

Read more:   Brotherhood of Azerbaijan and Turkey - guarantor of security in region

Peeking through this darkness is only possible with equipment that captures much shorter or longer wavelengths, like the Very Large Telescope in Chile, which was used by the authors of the papers.