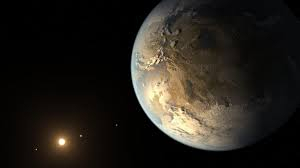 If there were alien civilizations in other star systems, would they be able to detect our presence here on Earth? This is a question that could lead us to new ways to search for signs of extraterrestrial intelligence, but not one that is necessarily easy to answer.

Nevertheless, a team of astronomers has identified 2,034 star systems within 100 parsecs (326 light-years) of Earth that would have the right vantage point to detect Earth life signs as our home planet orbits the Sun.

“From the exoplanets’ point of view, we are the aliens,” said astronomer Lisa Kaltenegger of Cornell University’s Carl Sagan Institute.

Using data from the Gaia space observatory – an ongoing project to map the Milky Way in three dimensions with the highest precision yet – Kaltenegger and her colleagues sought to determine if any alien civilizations out there could find humanity with the tools we use to find exoplanets.

We have several of these, but the most fruitful technique is what we call the transit method. When an exoplanet orbits a star, if that orbit is aligned just right, it will pass between us and its host star, known as a transit. This creates a very specific light curve signature as the starlight dims and brightens fractionally due to the exoplanet’s transit.

We can tell the size of the exoplanet, roughly, by the depth of the light curve, which can help rule out exoplanets unlikely to host life as we know it, such as gas giants like Jupiter.

Additionally, if the exoplanet has an atmosphere, astronomers can stack transits to amplify the spectrum of the host star’s light that passes through it. The way some wavelengths are enhanced or absorbed by the atmosphere can reveal its composition – including gases that indicate signs of life.

If, like Earth, those exoplanets had developed technology that pollutes its atmosphere, then hypothetically, we might be able to detect that too (although we haven’t yet).

The Gaia data has allowed Kaltenegger and her team to search for star systems that may have been able to do the same to us, over a 10,000-year span: from 5,000 years in the past up to 5,000 years into the future. This vantage point is known as the Earth Transit Zone.

“We wanted to know which stars have the right vantage point to see Earth, as it blocks the Sun’s light,” she said. “And because stars move in our dynamic cosmos, this vantage point is gained and lost.”

“Gaia has provided us with a precise map of the Milky Way galaxy, allowing us to look backward and forward in time, and to see where stars had been located and where they are going,” said astrophysicist Jackie Faherty of the American Museum of Natural History.

Of the systems that have been or will be in the Earth Transit Zone, seven are known to host exoplanets, some of which may even be habitable. They include Ross-128, TRAPPIST-1, and Teegarden’s star.

“Our analysis shows that even the closest stars generally spend more than 1,000 years at a vantage point where they can see Earth transit,” Kaltenegger said. “If we assume the reverse to be true, that provides a healthy timeline for nominal civilizations to identify Earth as an interesting planet.”

As part of their research, the team also had a look at which stars would be able to detect technosignatures – the technogenic radiation emitted from Earth. We first started transmitting radio waves into space only about 100 years ago, which means there’s roughly a 100 light-year radius around us from which those signals could be detected.

Within that radius, and that 100-year timeframe, there have been 75 systems in the Earth Transit Zone.

Our searches for alien civilizations have so far revealed no signs. The team’s research demonstrates that there are significant limitations for our detection methods, not least the ever-evolving configurations of the stars around us. But, given enough time, and luck, it may be possible to locate our cosmic neighbors.

The research has been published in Nature.