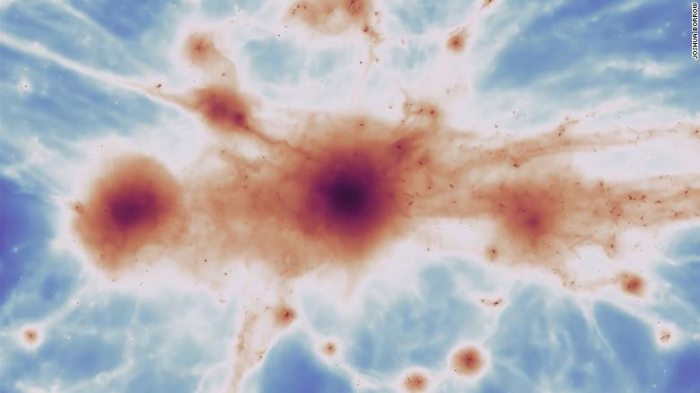 The structure of the early universe looked similar to a spiderweb holding everything together, according to a new study.

Astronomers used multiple telescopes to observe glowing filaments of gas acting like the strands connecting galaxies in a massive web. They were discovered in a proto-cluster of galaxies, or a group of galaxies forming a cluster, 12 billion light-years away in the Aquarius constellation. The cluster is known as SSA22.

Given its distance from us, that makes the cluster a structure from a time when the universe was much younger. Clusters can be filled with hundreds or even thousands of galaxies.

Previously, astronomers believed that galaxies formed and pulled themselves into cluster structures. Now, astronomers believe that gas filaments led to the creation of galaxy clusters. This also allowed galaxies to form in areas where filaments crossed. These galactic crossroads also created dense areas of matter.

When astronomers looked at where the gigantic filaments crossed, they found the supermassive black holes that act as engines of galaxies. They also spied galaxies that were actively forming stars.

The galaxies are fed by streams of cooling gas at these crossroads.

The Multi Unit Spectroscopic Explorer instrument on the European Southern Observatory’s Very Large Telescope helped the astronomers detect Lyman alpha radiation. This is ultraviolet light that is created by energized hydrogen gas that is irradiated by the galaxies in the cluster. They were able to pick out the faint filament wisps because they were energized by the bright light being thrown off by the galaxies creating stars.

Their findings published last week in the journal Science.

The radiation they encountered couldn’t be caused by background radiation in the universe, but must be triggered by galaxies bursting with star forming and the formation of black holes — both high energy events.

The new observations provided the detail necessary to pick out the filaments.

“Previous observations had shown that there (are) emissions from blobs of gas extending beyond the galaxies, but now we have been able to clearly show that these filaments are extremely long, going even beyond the edge of the field that we viewed,” Umehata said. “This adds credence to the idea that these filaments are actually powering the intense activity that we see within the galaxies inside the filaments.”

While galaxy clusters are some of the most massive structures in the universe to be governed by gravity, much of the universe’s gas actually exists between the galaxies. And simulations show that 60% of the hydrogen created during the Big Bang exists in these cosmic threads that help form a structured web.

The long filaments can extend for more than a million parsecs. A parsec is about 3.26 light-years. Across a super cluster of galaxies, it would provide enough fuel for star formation and growing black holes.

“These observations of the faintest, largest structures in the universe are a key to understanding how our Universe evolved through time, how galaxies grow and mature, and how the changing environments around galaxies created what we see around us,” said Erika Hamden in a related Perspective, assistant professor of astronomy at the University of Arizona. Hamden was not involved in the study.