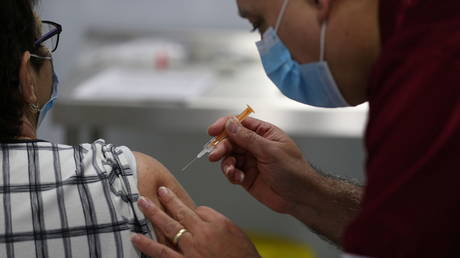 A person receives a dose of the Oxford/AstraZeneca COVID-19 vaccine at the Winter Gardens in Blackpool, Britain January 25, 2021. ©  Peter Byrne/Pool via REUTERS

AstraZeneca has denied claims circulating in German media that its Covid-19 vaccine has low efficacy among people 65 and over. The sensational reports have emerged as the EU mulls approval for the drug.

Two German outlets, Handelsblatt and Bild, cited government sources alleging that the AstraZeneca/Oxford drug has a poor performance record with senior citizens. Bild reported that among adults 65 and older, efficacy was “less than 10 percent,” while Handelsblatt put the figure at eight percent. The papers claimed that due to the worrying data, German officials did not expect the European Medicines Agency (EMA) to approve the drug for use on over-65s. (RT)

A special reportage on the Khojaly genocide has been aired on Ukraine’s Channel 5. It…