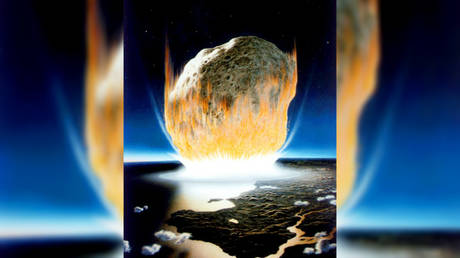 Artist’s interpretation of the asteroid impact that wiped out all non-avian dinosaurs. © NASA/Don Davis.

While everyone knows an asteroid killed Earth’s dinosaurs, how exactly it achieved this has remained the subject of some debate. Now, researchers have discovered the fiery apocalypse was even more awe-inspiring than we’d thought.

The asteroid, measuring an estimated 81 kilometers (50 miles) across, smashed into the Earth near Chicxulub, in what is now modern Mexico, with the force 10 billion WWII nuclear bombs, killing 75 percent of all life on Earth. The initial blast ignited forests and grasslands for thousands of kilometers.

Also on rt.com Four asteroids on COLLISION course with Earth

The impact then generated a tsunami several hundred meters high which reached as far as modern day Illinois in the US. Now, scientists at the University of Texas at Austin examining core samples from the impact site, from 500 to 1,300 meters (1,640 to 4,265 feet) below the seafloor, have found hard evidence of the exact modus operandi of the planet-killer asteroid.

In research published Monday, the team studying the impact crater off the Gulf of Mexico found charcoal and soil that were blasted thousands of miles away and then sucked back inwards by the far-reaching tsunami that swept across the Americas. A staggering amount of material was deposited back into the crater that same day, preserving the conditions of the blast site from the first minutes and hours of the impact. (RT)