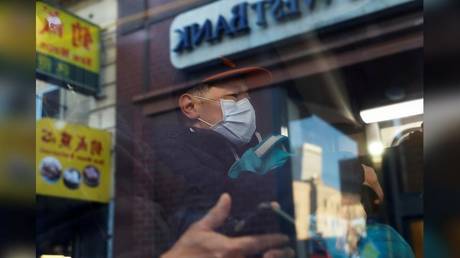 A man is shown riding a city bus in San Francisco's Chinatown area. Asians have been victimized in several attacks on the city's bus system in just the past week. © Reuters / Shannon Stapleton

San Francisco’s municipal bus system has emerged as a hot spot in an epidemic of unprovoked attacks on Asians, with two separate assaults occurring on the same day just one week after two elderly women were stabbed at a bus stop.

The latest incident happened Sunday morning, when an Asian woman was allegedly hit in the face for no reason by a man as she was boarding a bus in San Francisco’s Tenderloin district. The bus driver then intervened, stopping the man from striking the woman again, letting him exit the bus and calling police.

The woman suffered a split lip in the attack. Police gave no indication of whether she required medical treatment or if a suspect was arrested.

Sunday’s second attack occurred around midday, also in the Tenderloin district, when a 55-year-old Asian man was punched in the face and knocked out while riding a bus. He fell to the floor and was later taken to a hospital for treatment of his injuries, police said.

Police arrested 29-year-old Andre Smith in connection with the attack. He faces charges of assault likely to cause great bodily injury, aggravated battery, elder abuse and battery. The two men had argued before Smith allegedly struck the older man, police said, and race didn’t appear to be a motivating factor in the assault.

The latest incidents came five days after a 54-year-old black man allegedly stabbed two Asian women, ages 84 and 63, while they were waiting for a bus in the Tenderloin district, near San Francisco’s Chinatown area. The attack was unprovoked and nearly killed the 84-year-old. Both women were hospitalized with multiple stab wounds.

The suspect, Patrick Thompson, was arrested hours after the stabbings and made his first court appearance on Monday. He faces two charges of attempted murder, as well as assault with a deadly weapon and elder abuse. Police said they are still investigating whether the attack was motivated by race, which could lead to hate-crime charges. (RT)