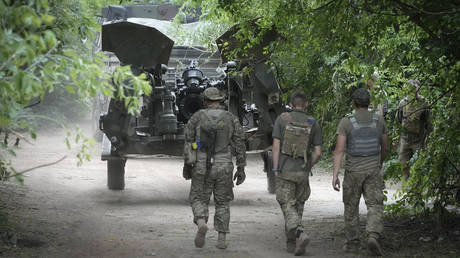 Germany and France want peace while the US and UK push for more war By Glenn Diesen, Professor at the University of South-Eastern Norway and an editor at the Russia in Global Affairs journal. Follow him on Twitter @glenndiesen.Ukrainian soldiers move a US-supplied M777 howitzer into position to fire at Russian positions in Ukraine’s eastern Donbas region. © AP / Efrem Lukatsky

During the Russian Civil War, the journalist Walter Lippman observed the dilemma of propaganda – it had the positive effect of mobilizing the public for conflict, but the negative outcome of obstructing a workable peace agreement.

The British had drummed up public support for intervention in the conflict by reporting on Polish victories, fleeing communists, and the pending collapse of the Bolsheviks. In reality, the opposite was happening. Lippman argued that because the UK public had been promised victory, there was no political appetite for a reaching a diplomatic settlement.

A century later, little has changed. Public support for supplying billions of dollars’ worth of weaponry and draconian sanctions was premised on the constructed narrative of a pending Russian defeat in Ukraine. Support for Kiev has been expressed by pushing stories of victories, while any admission of weakness could be ostracized as a hostile denigration of Ukraine’s sacrifices. However, two things can be true at the same time: On one hand, Kiev’s forces were well-trained, well-equipped and fought better than anyone had expected. On the other hand, the power of the Russian military is overwhelming and superior to the extent it hasn’t even had to mobilize its army. 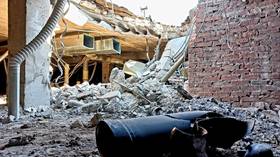 Reality is now catching up with the narrative. Russia has been making steady advancements and the sanctions have backfired terribly. With the situation becoming increasingly unfavorable to Ukraine and NATO, there are growing incentives for seeking a settlement with Russia. However, how can the narrative of a forthcoming victory be changed, and can the US-led bloc maintain its solidarity under a new narrative of defeat?

NATO and Russia have been fighting proxy conflicts since the abandonment of agreements on a pan-European security architecture based on “indivisible security” in a Europe “without dividing lines.” Ukraine has become the latest victim in the subsequent struggle about where to draw the new boundaries.

NATO has presented its own role in the conflict as merely being support for Ukraine. The consensus was that the Ukrainian sacrifices and Western economic pain would be the necessary cost for victory. However, what happens when it is accepted that Russia is winning? Is it “support” for Ukraine if extending the conflict will only result in more Ukrainian casualities, loss of more territory, and the possible destruction of the Ukrainian state?

Backing for Ukraine could be expressed as NATO offering something at the negotiation table to reduce the costs for Kiev. It is conceivable that NATO could extract significant concessions from Moscow if Russia were offered what it has sought for the past three decades – security guarantees that include the end of NATO expansionism and withdrawal of American weapon systems from its borders. However, supporting Ukraine in such a manner would dent the narrative of NATO’s infallibility and being solely a “force for good.”

Who should be blamed?

The sudden shift from a victory to a defeat narrative demands that someone takes the blame for losing the war. Reminiscent of Biden blaming Afghanistan’s political leaders and its military for the situation in that country, the American leader has now begun blaming Ukraine for not heeding American warnings about the pending Russian attack. In return, Kiev is using increasingly strong language to condemn its Western partners for failing to supply enough weapons. A case in point is how the Ukrainian ambassador to Berlin even called German Chancellor Olaf Scholz a “sulky liver sausage.” 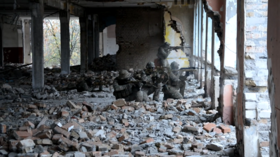 In the US there has been criticism of France for its diplomacy with Russia and accusations that Germany did not supply enough weapons, while in Europe there is now more questions about the uncompromising and confrontational stance of the US prior to Russia’s intervention.

A new narrative also needs to reflect new objectives. Victory over Russia was a unifying objective within NATO. It was always unclear what a victory meant. For example, did it include the conquest of Crimea? Would it entail more American weapon systems even closer to a nervous and humiliated Russia, armed with nuclear weapons? Would it be in the interest of the West to have a weakened Russia with excessive reliance on China? However, strategic ambiguity about what “victory” entailed has prevented splits within the military bloc.

In defeat, the competing national interests are more difficult to contain and unity subsequently fragments. The US has certain interests in a protracted war, which could turn Ukraine into an Afghanistan for the Russians. The war has already delivered certain benefits for the US such as an energy and economic split between the EU and Russia, ensuring bloc discipline from the Western Europeans, cementing Ukraine’s position as a bulwark against Russia, and weakening Moscow.

Some are therefore arguing in favor of supplying more weapons and rejecting diplomacy. For example, US Representative Dan Crenshaw supported the opportunity of fighting Russia with Ukrainian lives: “Investing in the destruction of our adversary’s military without losing a single American troop strikes me as a good idea.” US Secretary of State Antony Blinken framed the proxy war in more benevolent terms by suggesting that the US was arming Ukraine to ensure Kiev would be in “the strongest possible position at any negotiating table that may emerge.” Chas Freeman, a former US ambassador and assistant secretary of defense, criticized this US position as a cynical “fight to the last Ukrainian.” (RT)