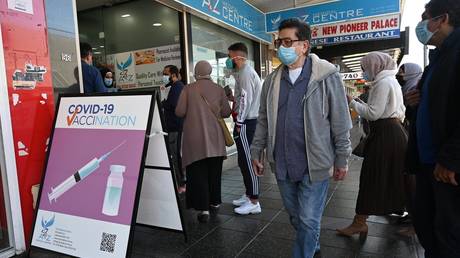 Residents queue up outside a pharmacy for a Covid-19 vaccination in western Sydney on July 30, 2021. © Saeed KHAN / AFP

As concerns grow over the spreading Delta variant, PM Scott Morrison revealed a 70%-vaccination goal for the next stage of eased restrictions. His cabinet agreed on the roadmap after 170 new cases were recorded in NSW on Friday.

In a press conference on Friday, Morrison announced the ‘phases’ which his government have planned for the opening up of Australia–a country which has been hard hit with the delta variant in certain regions and in Sydney, and have imposed extended lockdowns. 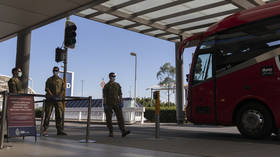 While 170 new cases were recorded on Friday in New South Wales (NSW), the worst-affected region of Australia this month, Morrison said that the next phase in his Covid roadmap would be to fully vaccinate 70% of eligible Australians. This milestone, which he has called ‘phase B,’ would mean a higher cap on arrivals on international flights and fewer restrictions for fully vaccinated citizens.

Read more:   Humans left behind a record amount of e-waste in 2019

The details of the lifted restrictions are ‘still being worked through,’ the PM said.

Under a third, ‘Phase C,’ when 80% of population would be immunized, fully vaccinated Australians will have no restrictions and would be allowed to leave the country.

Morrison has tried to project a sense of unity amongst Australians, saying that states can only move to Phase B if the whole country reaches that average on a national level, and then that state or territory itself also reaches 70%.

“All of Australia has to get there together on average,” said the PM. He also added that there had been over 200,000 doses administered in the last 24 hours, as of Friday evening Australian Eastern Standard Time. But unity hasn’t been a common sentiment amongst many Australians during the pandemic, especially for citizens stuck overseas.

Read more:   Kings of Leon bomb, Mac Jones has fans in hysterics – and Trevor Lawrence surprises no one

Since the crisis started, Australia has had strict travel restrictions on citizens wanting to leave or return to the country. Many Australians stranded abroad have either had their flights home bumped due to stricter arrivals caps or, for those who make it back to Australia, have had to personally finance AU$3,000 for their mandatory two-week hotel quarantine. (RT)