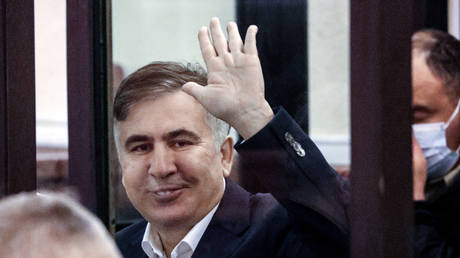 Nail clippings taken from jailed former Georgian President Mikhail Saakashvili have tested positive for arsenic, his lawyer has claimed ahead of a court hearing involving his client. The ex-leader’s supporters have maintained that he is gravely ill and has had toxic heavy metals in his body.

Shalva Khachapuridze, who represents Saakashvili, said on Monday that the results of the toxicology test of his client’s samples would be available later in the day. The presence of the poisonous element was confirmed to him in a phone call, he told journalists on Monday, according to the private television station Mtavari Arkhi.

Saakashvili sneaked into Georgia in 2021 ahead of municipal elections, despite the risk of being arrested and facing prosecution on various charges. At the time, he had already been sentenced in absentia based on some of the charges, while others were still pending. On Friday, he is set to appear before a court over the most recent alleged transgression – an illegal crossing of the national border, Khachapuridze said.

The attorney stated that his client would probably have to use a wheelchair to attend the proceedings because he can no longer walk properly. 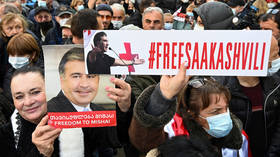 Saakashvili’s supporters have previously claimed that his condition has significantly deteriorated in Georgian custody. He has reportedly been diagnosed with at least 17 ailments, including tuberculosis and dementia.

Earlier in November, a doctor from a Georgia-based NGO claimed that hair samples taken from Saakashvili had shown traces of mercury and two other heavy metals, which she assessed to be evidence of a possible poisoning.

The claim was supported by the politician’s mother, but Saakashvili himself stressed in a statement posted on social media that he was not making any allegations of foul play. The Georgian Justice Ministry reacted by asking the national forensic bureau to examine the high-profile inmate.

Saakashvili’s health is set to be mentioned in an upcoming report by the European Parliament (EP) on the progress made in the implementation of the 2014 Association Agreement with Georgia. The document may tie the country being given candidate status to the former president’s release, according to amendments adopted this month by the EP’s Committee on Foreign Affairs.

The country’s ruling party, Georgian Dream, downplayed the pressure from the EU. Tbilisi Mayor Kakha Kaladze, who also serves as the party’s secretary general, asserted that the draft report’s content was “worth nothing,” because it included wrong interpretations of what was happening in Georgian politics. (RT)