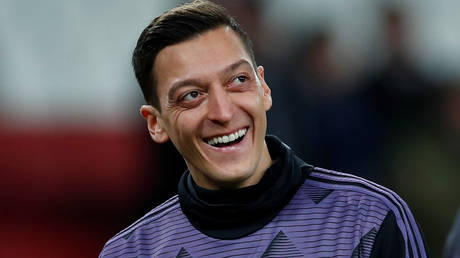 Mesut Ozil may have been dropped from Arsenal’s UEFA Europa League squad, but he kept fans entertained on Thursday by tweeting throughout their 2-1 win over Rapid Vienna.

The German was left out of the Gunners’ European and Premier League squads for the season, so he said he would cheer the team on from home.

“When I can’t support on the pitch tonight, I will support in front of the TV in London. What are your predictions for the match? I go for a 4-1 away victory. Goalscorers Sead Kolasinac, Mohammed Elneny, Alexandre Lacazette and Nicolas Pepe.”

When I can’t support on the pitch tonight, I will support in front of the TV in London. What are your predictions for the match? I go for a 4-1 away victory 🔴💪🏼 goalscorers @seadk6, @ElNennY, @LacazetteAlex & Pepe😉#UEL#YaGunnersYa

The 32-year-old is the Gunners’ top earner on £350,000 per week, and fans were envious of his position despite him being dropped from the team.

“Mesut Ozil is getting paid £350,000 every single week to sit at home and predict match scores. What a life,” one wrote, while another echoed: “£350k a week to make score predictions on Twitter and to PR stunt, what a life he’s living.”

Mesut Ozil is getting paid £350,000 every single week to sit at home and predict match scores.What a life. https://t.co/F3DUhMYxUH

£350k a week to make score predictions on Twitter and to PR stunt, what a life he’s living. https://t.co/GCkWnDfmq6

Ozil continued to tweet his support for the team throughout the game, giving the fans something to enjoy in a goalless first half.

“The most entertaining thing in that first half was Mesut Ozil’s tweets,” wrote one supporter, while another questioned his absence: “I don’t want to say it again but we have Mesut Ozil live blogging at home on £350k per week and we have two keepers on the bench and Arteta is telling us this is for footballing reasons … serious.”

“Ozil is actually Arsenal’s man of the match tonight,” added a third.

The most entertaining thing in that first half was Mesut Özil’s tweets….

He consoled goalkeeper Bernd Leno after he gave the ball away inside his own area, leading to Taxiarchis Fountas’ opener six minutes into the second half.

The playmaker also cheered on David Luiz’s equalizer in the 70th minute, as well as Pierre-Emerick Aubameyang’s close-range winner four minutes later. At full-time, Ozil even set up his own man of the match vote.

Nice to start with 3 points!💪🏼Who was your Man Of The Match? My 4 options 👇🏼 #YaGunnersYa#M1Ö#UEL@Arsenal

In the other match in Arsenal’s group, Molde beat Dundalk 2-1 to sit level with the Gunners on three points.

Also on rt.com Whether cowardly or vindictive, there is much more than meets the eye to Mesut Ozil’s suspicious Arsenal squad snub (RT)