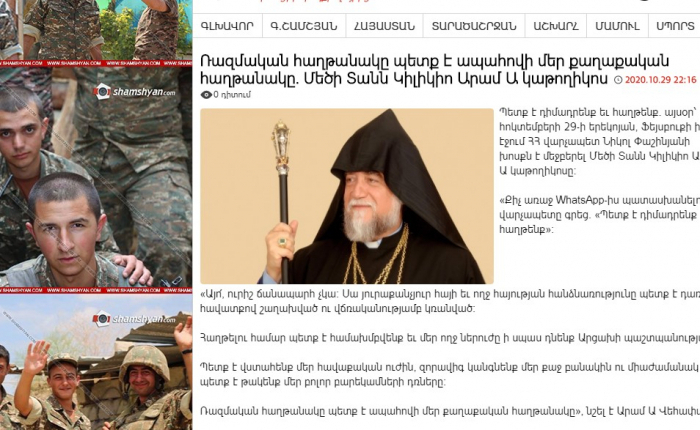 Armenian religious figures continue to call for war. Instead of calling for peace and reconciliation, the Armenian churches have taken another obsonous step, urging people to shed blood on someone else’s land. Catholicos of the Great House of Cilicia Aram I appealed to the Armenian people to join the war against Azerbaijan.

He called on the Armenians to resist the Azerbaijani Army, which liberated their lands: “We must resist and win.”

The Catholicos cited Prime Minister Nikol Pashinyan: “We must unite to win and use all our potential to defend Artsakh. We must stand by our army and knock on the doors of all our friends at the same time,” said Aram I, who behaves more like an armed criminal than a cleric.

Note, earlier we reported on Armenian religious figures’ support for terrorism and murders, as well as their efforts in this direction. Garegin’s actions, who provoked the Armenian youth to the battlefield, and other clerics who took photos with guns in their hands are not in compliance with the religious values.