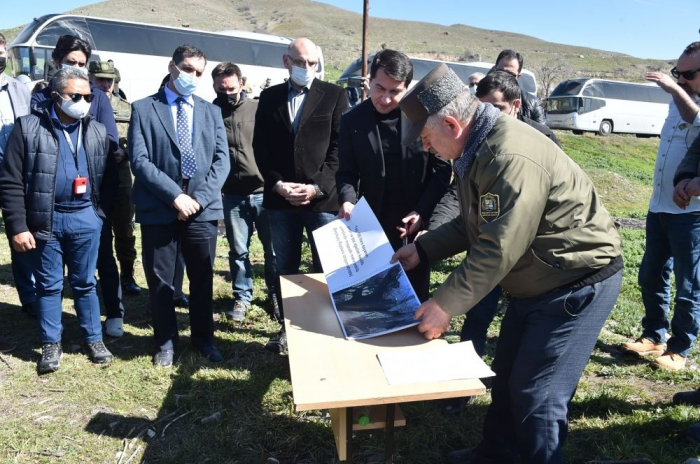 The heads of diplomatic corps accredited in Azerbaijan, military attachés and journalists who visited the Gubadli district liberated from Armenian occupation got acquainted with the consequences of the ecological terror committed by Armenian vandals. The diplomats and military attachés were accompanied by Assistant to Azerbaijan’s President, Head of the Foreign Policy Affairs Department of the Presidential Administration, Hikmat Hajiyev, Assistant to the First Vice President Elchin Amirbeyov, Rector of ADA University Hafiz Pashayev and other officials.

The representative of the Ministry of Ecology and Natural Resources Mohubbat Gurbanov spoke about the vandalism of Armenians in Gubadli. He noted that large mulberry orchards along the Hakari river have been subject to ecological terror. All trees were felled and burned. Such rare tree species as the east sycamore and greece Greek walnut were destroyed. The Basitchay State Reserve, covering an area of 107 hectares, was also subjected to ecological terror. Several fires were set here. District villages have been destroyed, vegetation has been destroyed.

Read more:   The Romanian portal writes about liberation of Kalbajar

The visit of the heads of diplomatic corps accredited in Azerbaijan, military attachés and journalists to the liberated districts of Azerbaijan took place on the basis of the instructions of President Ilham Aliyev.