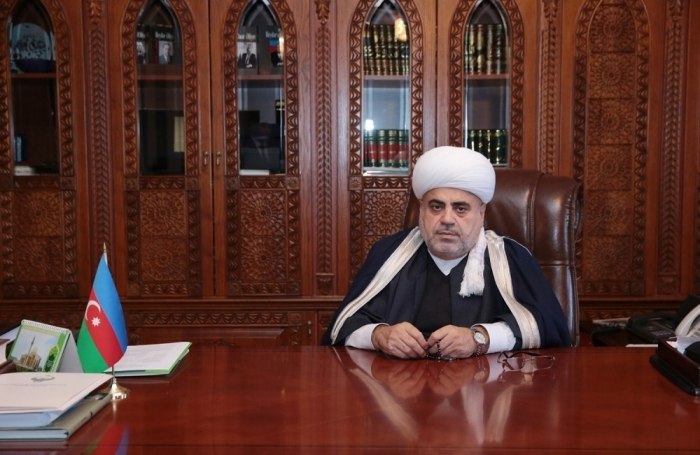 Chairman of the Caucasus Muslims Office Sheikhulislam Allahshukur Pashazade has issued a statement condemning the Armenian Apostolic Church clerics’ actions against the core principles of Christianity and the peaceful calls of the Bible.

The statement says: “Since July 2020, Armenia’s aggressive regime, resorting to new military provocations, has continued to fire – using missiles and heavy artillery – at our residential settlements and civilians in Azerbaijan’s Nagorno-Karabakh region and surrounding areas, as well as along the state border with Armenia.

Following the constant shelling, starting from September 27, of tens of Azerbaijani cities and settlements, including Ganja, Azerbaijan’s second-largest city located far from the combat zone, our ancient city of Barda came under missile attacks by Armenia on October 28. As a result of the missile attack on the city of Barda, 21 civilians were killed and more than 70 people were injured. In total, more than 90 civilians have been killed, 392 have been wounded, 2,406 houses, 92 multi-apartment apartment residential buildings and 423 civilian facilities have been destroyed so far. The killing of innocent children in Ganja and Barda cannot leave anyone indifferent. However, the international community has not yet expressed a unanimous stand on this act of terrorism committed by Armenia at the state level. Throughout history, Armenia has carried out many bloody crimes. Armenians have committed crimes incompatible with humanity, such as genocide, occupation, extremism, terrorism and violence.

Non-implementation of UN resolutions, separatism, attempts to establish a so-called state, disruption of negotiations on a peaceful solution to the conflict, non-compliance with agreements and commitments are the activities inherent in the current Armenian regime. And this is leading to the collapse of the Armenian statehood. Genocide, xenophobia, Islamophobia, monoethnicity, ethnic cleansing, creation and financing of terrorist organizations in order to secure historical territorial claims, and the use of religion for their own aggressive intentions are the characteristics of Armenian extremists.

The policy of destruction of cultural heritage, cemeteries, temples and religious monuments of different faiths in our occupied territories, insulting mosques, falsification of history and change of its origins, appropriation and Gregorianization – all these are manifestations of Armenian vandalism.

Another peculiarity of the Armenian regime is the spread of false, defamatory and provocative information. For example, they slander Azerbaijan, although it is them who use mercenary terrorists. They claim that “Karabakh is Armenia”, and try to appropriate ancient toponyms in Azerbaijani lands by giving them Armenian names. Another example – they try to draw the global attention claiming they were subjected to genocide, although it is them who committed genocides in Khojaly, Ganja and Barda. They justify and immortalize the perpetrators of the fascist era, which exposes Armenia’s modern political line. It is regrettable that the Armenian Church blesses Armenia’s policy of aggression and war crimes. The Armenian Apostolic Church blesses death, the murder of children, women and civilians, rather than human life which is the most sacred value. And it is beyond logic. A call to live and give life is enshrined in all major religious books, in the Bible, and in Prophet Jesus’ sermons. Such behavior of the Armenian Apostolic clergy, which contradicts the core principles of Christianity and the peace-loving calls of the Bible, is an insult to the religion they belong to. Instead of praying for peace, they inspire – holding a cross in one hand and a weapon in the other in the trenches – their soldiers to occupy Azerbaijani lands. And this questions the true nature of these religious leaders. By encouraging their people to violence, rather than peace, and by persuading them to fight to death, the Armenian state and the Armenian Church are dragging the nation into catastrophe.

I urge heads of world states and international organizations, as well as religious leaders to make a proper judgment about the nature and potential consequences of the Armenian Apostolic Church leader’s calls on world Armenians. If the religious center of Armenia, a mono-ethnic country, promotes fascism, terrorism, occupation, annexation, national and religious hatred, it is a very dangerous trend and a threat not only to the region but also to global peace, peaceful coexistence of religions and civilizations.

Realizing that it is helpless in the face of resoluteness and persistence our country is showing in the liberation of the internationally recognized territories, and that defeat is inevitable, the Armenian side uses the church factor as a last resort, as it strives to present the conflict as a Christian-Muslim confrontation and gain support of the Christian world. The dangers posed by this factor have been discussed and unambiguously condemned as unacceptable during my meetings with the world’s leading religious leaders, including Patriarch Kirill of Moscow, Catholicos-Patriarch of All Georgia Ilia II, as well as during meetings held through the World Council of Churches which also involved Armenian religious leaders. This factor runs absolutely contrary to the peace-loving nature of religions.

Read more:   Outflow of capital continues to increase in Armenia

We once again declare that the ongoing armed clashes are taking place in the Azerbaijani territory. In our just cause we are not against any religion or nation, we have not carried out aggression against any country, and the Armenians living in Karabakh are our own citizens.

We do believe that under the leadership of the head of state His Excellency Mr Ilham Aliyev our victorious army will win a victory and the blood of our martyrs will be avenged. We do want peace to be established and count on the world community’s support for our intentions to ensure peace and tranquility in our Motherland Azerbaijan!”