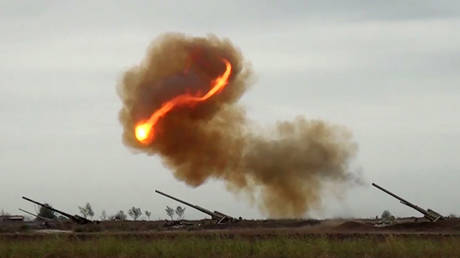 Azerbaijani artillery and aircraft have pounded a military base in Armenia, and a civilian bus has been hit in a “drone strike,” the Armenian Defense Ministry reported, telling its rival to brace itself for a “harsh response.”

Azeri forces targeted non-combatants in the small Armenian border town of Vardenis on Tuesday, according to Artsrun Hovhannisyan, the Armenian Defense Ministry representative. The official uploaded to social media what he said was photographic documentation of the aftermath of a strike by an Azerbaijani unmanned aerial vehicle (UAV). (RT)

Over 42 million infected with coronavirus around the world