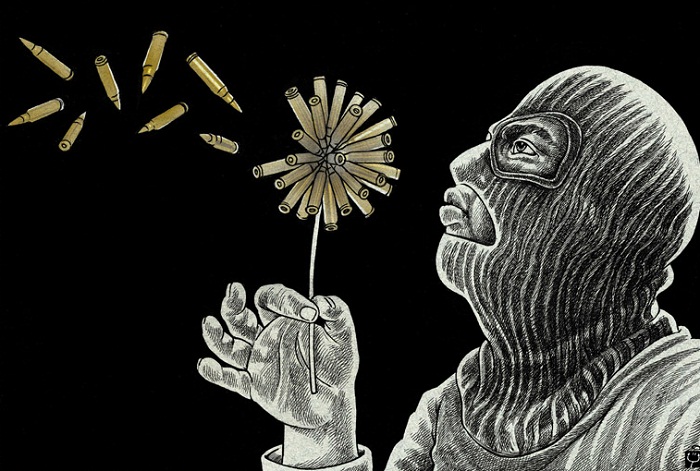 After the open assertion by Armenia in the late 1980s of its territorial claims on Azerbaijan and the launching of armed operations in the Nagorno Karabakh region of Azerbaijan, terrorism has been actively used as one of the means to achieve annexationist aspirations.

In all, as a result of terrorist acts against Azerbaijan perpetrated since the late  1980s by the Armenian secret service and Armenian terrorist organizations closely connected with it,  over  2,000  citizens of  Azerbaijan have been killed, the majority of them women, the elderly and children.

It is notable that the first entry in the tragic list of crimes by Armenian terrorists in the territory of Azerbaijan was made before the beginning of the conflict when in 1984, in Baku, a passenger bus on the No. 106 route was blown up, killing one woman  — the mother of two children — and injuring several other people.  The identified terrorist responsible for that crime was an Armenian named Vartanov.

In  December  1988,  a military transport aircraft on the Baku-Yerevan route with rescue workers and humanitarian aid for victims of the Armenian earthquake on board suffered a disaster near Yerevan in circumstances which remain unexplained.    Some versions speak of firing and others of the deliberate disorientation of the pilot by air traffic control at Yerevan airport (in view of the low altitude of the flight and the mountainous terrain).  The underlying motive for this planned “air disaster” is completely unprecedented, in that the victims of this crime were  79 people who had been sent on a humanitarian mission from Azerbaijan to Armenia, despite the difficulties that had by then arisen in relations between the two republics.

On  27  May  1989, on a train from Yerevan to Baku,  an Armenian citizen, V. Minasyan, was arrested and found to be in possession of an explosive device. In her testimony, Ms Minasyan confessed that she had been intending to set that device to go off in the capital of Azerbaijan, Baku.

On 24 July 1989, there was an explosion on a train of Azerbaijan Railways at Karchevan station.

Over the period from 19 January to 17 February 1990, a terrorist group carried out numerous raids from the territory of Armenia targeting the inhabitants of the frontier villages of Kheyrymly and Sofulu in the Gazakh district of Azerbaijan. The same terrorist group carried out an attack on a patrol vehicle of the Gazakh district division of internal affairs and plotted the destruction of a railway locomotive. Two members of the group, L. Arutyunyan and A. Mkrtchyan, were sentenced to five and six years’ imprisonment, respectively.

On 18 February 1990, 13 people were injured by an explosion in an intercity bus on the Shusha-Baku route, at the 105 km marker on the Yevlakh-Lachyn road.

On 4 March 1990, the Nabiyar-Shusha pipeline, which supplied the town of Shusha in the Nagorno Karabakh region with drinking water was blown up.

On  11  July 1990, between the settlements of Getavan and Charaktar in the Tartar district of  Azerbaijan, an armed assault was launched on a road convoy, travelling under troop escort and conveying people and goods to the town of Kalbajar. In that terrorist act, three people were killed and 23 injured. The investigation identified one A. Airiyan as the perpetrator of this crime.

On 10 August 1990, in the Khanlar district of Azerbaijan, terrorists blew up an intercity bus operating on the Tbilisi-Aghdam route,  killing  20 passengers and injuring 30. The perpetrators of that terrorist act were arrested before they were able to carry out their plan to blow up,  on  17  June  1991, a bus on the Aghdam-Tbilisi route. Two Armenians, A. Avanesyan and M. Tatevosyan, were found guilty of those crimes.

In November 1990, a terrorist group, set up by one M. Grigoryan, a member of the terrorist organization “Ergraparkh”, based on the territory of Armenia and composed of inhabitants of the Echmiadzin district of  Armenia, was sent into the territory of Azerbaijan.  This group was disarmed by the law enforcement agencies of Azerbaijan while attempting to carry out terrorist acts.

On 9 January 1991, at the 5 km marker on the Lachyn-Shusha road in the area of Galadarasi village, terrorists fired on a UAZ-469 vehicle belonging to military unit  No.  44688  of the city of  Ganja, killing the driver,  Sergeant  I.  I.  Goek,  the commander of the reconnaissance battalion, Lieutenant Colonel A.  P. Larionov, the chief  of  staff  in  the  commandant’s  office  of  military  unit  No.  3505  (the  command centre for the special units of the interior forces of the Ministry of Internal Affairs of the Union of  Soviet Socialist Republics),  Major I. D. Ivanov, and a journalist from the  newspaper “Molodezh  Azerbaidzhana”,  Ms.  S. A.  Asgarova. The investigation identified A.   Mkrtchyan, G. Petrosyan, A. Mangasaryan,   G. Arutyunyan and G. Arustamyan as the perpetrators of this crime.

On 30 May 1991, 11 people were killed and 22 injured following an explosion on a passenger train from Moscow to Baku near Khasavyurt station (Dagestan, Russian Federation).

In May  1991, officials of the law enforcement agencies arrested  S. Aznaryan, an inhabitant of the Noyemberyan district of  Armenia, on a Baku-Tbilisi train at Shamkir station and removed from his possession two mines,  a sub-machine gun and maps of the Azerbaijan rail and road network.

On 31 July 1991, a Moscow-Baku passenger train was blown up near Temirgau station (Dagestan, Russian Federation), killing 16 people and injuring 20.

The law enforcement agencies of Azerbaijan detained and disarmed two members of the Armenia-based terrorist organization  “Urartu”,  A. Tatevosyan and V. Petrosyan, who, on 2 August 1991, had carried out terrorist attacks in the territory of the Kalbajar district of Azerbaijan.

On 20 November 1991, an MI-8 helicopter carrying a group of representatives from the Russian Federation and Kazakhstan and senior Azerbaijani leadership was shot down near the village of Garakand in the Khojavand district of Azerbaijan. The killing of 22 people, including statesmen from three countries, effectively put an end to the first attempt to settle the Armenia-Azerbaijan conflict peacefully and prompted an escalation of violence in the region.

The single successful terrorist act carried out by Armenian terrorists against vessels of the Azerbaijan Caspian Shipping Line occurred on  8  January 1992. An explosion on the ferry Sovietskaya Kalmykia operating between Krasnovodsk and Baku claimed the lives of 25 people and injured 88. In the same year, an attempt to carry an explosive device onto the steamer Sabit Orujov was prevented in time.

On 28 January 1992, a civilian helicopter flying on the Aghdam-Shusha route was shot down by terrorists over the Azerbaijani town of Shusha in the Nagorno Karabakh region, killing 41 passengers, most of them women and children, as well as the crew.

On  28  February 1993, 11 people were killed and 18 injured near Gudermes station (Dagestan, Russian  Federation) by a bomb placed on a Baku-Kislovodsk train.

On 2 June 1993, a passenger carriage was blown up in a siding at the Baku railway station. On 22 July 1994, I. Khatkovsky, a Russian   national   and correspondent for  the  newspaper Demokratichesky  Tilzit, resident of the village of Gastelovo in the Slavsky District of the   Kaliningrad   region   of   the   Russian Federation, was found guilty of committing this crime and sentenced to eight years’ imprisonment   by   the   Supreme   Court   of   the   Republic   of   Azerbaijan.   The investigation  process  revealed  that Mr Khatkovsky  had  been  recruited  by  the Directorate for National Security (the former State Security Committee) of Armenia and   provided   with   detailed   instructions   on   how   to   organize   the   bombing of transportation and communications facilities and vital services in Azerbaijan, gather intelligence  information  and  commit  terrorist  acts  in  the  territory  of  the  Russian Federation. The case of Mr Khatkovsky helped to uncover and neutralize a group of agents of the Directorate for National Security of Armenia who was responsible for organizing terrorist acts in  Azerbaijan, Georgia and the  Russian  Federation.  The head of the group was Lieutenant-Colonel Jan Oganesyan, the chief of the department of intelligence and subversive operations in the territory of an adversary. Lieutenant-Colonel Oganesyan and his two subordinates, Ashot Galoyan and Boris Simonyan, were sentenced by the military tribunal of the Tambov garrison, Russian Federation, to various terms of imprisonment.

On 1 February 1994, a Kislovodsk-Baku passenger train was blown up at Baku station, killing three people and injuring more than 20.

On 17 March 1994, an Iranian C-130 transport aircraft was shot down over the territory of Azerbaijan occupied by Armenian armed forces, resulting in the deaths of 32 people who were citizens of the Islamic Republic of Iran.

On 19 March 1994, a bomb placed in one of the carriages of a train exploded at the 20 January subway station in Baku. As a result of this act,  14 people were killed and 42 were injured, some seriously.