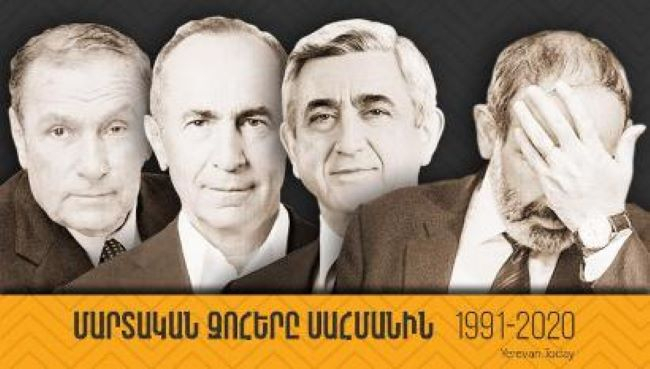 Armenian media published statistics on the country’s military losses on the frontline in different years.

The statistics obtained by the media after the request sent to the Armenian Prosecutor General’s Office.

According to the statistics, under the leadership the first President of Armenia Levon Ter-Petrosyan (1991-1998), the country’s losses amounted to 7,000 people. The media states that it was impossible to obtain information on the exact number of losses in those years from official sources, so the figures are approximate, but based on reliable data.

Besides, 92 Armenians died on the frontline during the presidency of Robert Kocharyan in 1998-2008.

During the third president Serzh Sargsyan (2008-2018), 228 people died. Of these, 86 Armenian servicemen were killed during the April 2016 war. The number of losses in other years can be compared with the number recorded during the second presidency.

Under the leadership of Armenian PM Nikol Pashinyan, military losses exceeded 5,000, and according to some experts, it is more than 7,000.

“Moreover, we have lost the homeland (the occupied Nagorno-Karabakh region of Azerbaijan – ed.) we have captured and preserved for 26 years at the cost of more than 6,000 lives. We lost almost everything as a result of the 44-day war. As the Prime Minister’s wife, Anna Akobyan, once said, these sacrifices were made in vain”, the article reads.

Therefore, the official data of the Prosecutor General’s Office show that the situation in Armenia and Karabakh is the most stable and secure during the second and third presidents, “, the article adds.

Biden administration will NOT sanction Saudi Prince over Khashoggi killing, but will use ‘more effective’ tools – White House