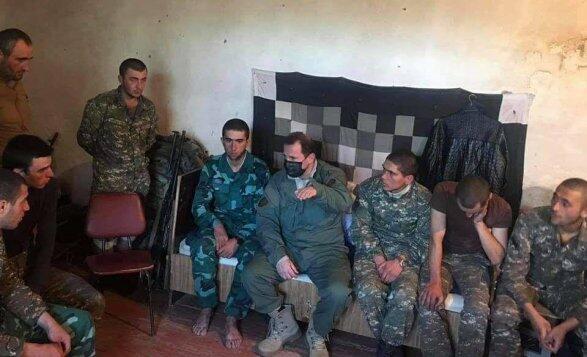 Since the beginning of the war, the Armenian army has bombarded the media with fake news on Azerbaijan claiming that Syrian mercenaries took part in the battles on the Azerbaijani side.

The Armenian side has repeatedly stated that Syrian mercenaries fought together with the soldiers from the Azerbaijani Armed Forces wearing the uniforms of  Azerbaijani border guards.

The photos published on October 25 from the meeting of Armenia’s Defense Minister David Tonoyan with Armenian soldiers completely refuted this Armenian lie – in these photos, soldiers in military uniforms of Azerbaijani border guards sit next to David Tonoyan. How is that possible?

This once again confirms that the Armenian side made its soldiers wear such uniforms and filmed fake videos about the military operations of the Syrian mercenaries in Azerbaijan.

Realizing their huge mistake, the telegram channels of Armenia began to delete the news, and the representative of the press service of the Armenian Defense Ministry Shushan Stepanyan kept the news, but deleted the photos of soldiers in those uniforms.

This once again shows that the Armenian side foolishly exposes itself and then tries to quickly correct its mistake. But the exposure of the Armenian lie has already taken place in one way or another, and the world now knows how Armenia spreads fake news and misinformation – making  provocations, creating a theater with its military servicemen and thus trying to fool the whole world.