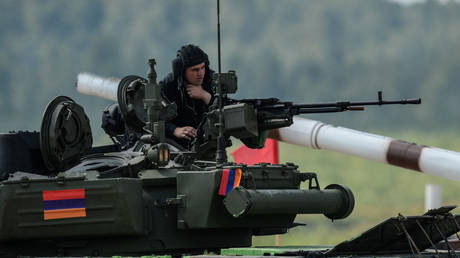 The ongoing fighting over disputed Nagorno-Karabakh is unlikely to end up in a blitzkrieg, a top Armenian official warned. He said his country is preparing for a protracted war, not least because of Turkey’s role in the region.

“We are preparing for a long-term war. Why? Because, I say it again, the main player here is not Azerbaijan but Turkey,” Vagarshak Harutyunyan, a senior adviser to Armenia’s prime minister told a Latvian YouTube channel on Monday.

Turkey, a close partner for Baku but a historical foe for Yerevan, is “directly involved” in the conflict over Nagorno-Karabakh, an ethnic Armenian-populated landlocked enclave within Azerbaijan. Fierce fighting erupted on the disputed region’s borders on Sunday, with both Armenian and Azeri troops using heavy weaponry, large-caliber artillery, and combat aircraft in the clashes.

Harutyunyan, formerly Armenia’s Defense Minister, spoke of the universal conscription call-up recently issued in his own country as well as Nagorno-Karabakh, indicating that he wasn’t convinced the conflict will end any time soon. (RT)