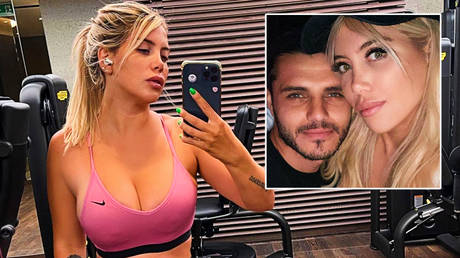 Stunner Wanda Nara reportedly hired a private detective to investigate whether her husband, PSG ace Mauro Icardi, had been having an affair before an explosive sequence of events that many have interpreted as the couple splitting.

Striker Icardi was said to have missed training with the French giants in an attempt to reconcile with lover Nara, who posted a cryptic message about a family being “ruined for a sl*t”, deleted all of her Instagram photos featuring the 28-year-old and posted a photo of her hand, saying she preferred it “without a ring”.

The relationship status of one of football’s greatest power couples remains unclear, although Icardi posted a photo that appeared to show the duo embracing, while Ker Weinstein, an Argentinian model and businesswoman with links to the Icardi family, is said to have posted a screenshot of a message she received from Nara confirming that she is “separated”.

Nara – mother to their two daughters, as well three sons she had with former Icardi teammate Maxi Lopez before her high-profile affair with the ex-Argentina forward in 2013 – hired an investigator and hacked her husband’s phone, UOL has reported program Los Angeles de la Manana as saying.

The outlet is among the media to name China Suarez, a model and actress with more than 5.2 million Instagram followers, as the woman Icardi allegedly strayed with.

Socialite Suarez is quoted by Marca to have told Icardi in a message: “Someday we have to get out and f*ck – somewhere in the world where they don’t know you.”

UOL also claims that Suarez would have arranged a meeting with Icardi via messaging service Telegram rather than WhatsApp, explaining that it is “less popular and more discreet”, making its use less likely to “arouse suspicion”.

The developments could affect Icardi’s future at the Ligue 1 favorites, where he is famous for being represented by his glamorous wife.

Known for her purported hard bargaining, Nara was said to have advised against a potential move for Icardi to Italian heavyweights Juventus in August because their children were settled in Paris.

Newcastle, under mega-wealthy new Saudi Arabian owners, have also been linked with a move to take the former Inter Milan hitman to the Premier League.

Icardi is thought to be in contention to appear for PSG when they host German side RB Leipzig in a Champions League group stage clash on Tuesday.

Marca said Suarez denied to MDZ that she had messaged ex-Serie A Goal of the Season winner Icardi.

“I have no idea where all this came from,” she purportedly said. “Whoever it may be, I don’t even know them. I myself have just separated.”

Also on rt.com ‘Like my hand better without a ring’: Wanda Icardi triggers new round of rumors despite PSG star Mauro hinting at reconciliation (RT)