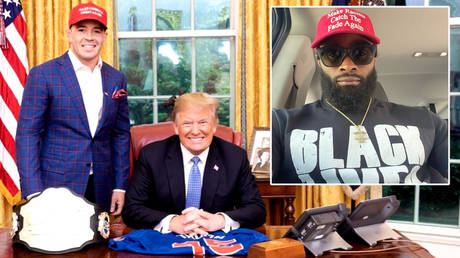 Ending a week in which he has slammed “woke athletes” and seen his opponent repeatedly mention “Black Lives Matter” in his media quotes, Colby Covington has accused Tyron Woodley of treason and directed more taunts at his critics.

Notorious provocateur Covington has been relatively restrained towards social activist Woodley in the build-up to their headline UFC Fight Night meeting on Saturday, although the pair attended separate press conferences on Thursday and Covington has made their polarized political views resoundingly clear during fight week.

The former welterweight interim champion, who met Donald Trump at the White House in 2018, posed again with the US president on Monday while his Republican hero declared him a “winner” and a “champ”.

“The [president] will be tuned in to watch me this Saturday night,” announced Covington in his latest attempt to antagonize fans. “How about you, snowflakes?”

The face I make when I’m ready to give a domestic terrorist sympathizer a hard lesson in American resolve. 🇺🇸🦅🇺🇸 – 👔 by @sartoriagherardi #AmericasChamp #KAG2020 #MAGA #TrumpTrain #ufcvegas11

Woodley wore a black-and-white T-shirt emblazoned with the Black Lives Matter slogan to his media briefing, adorned with a hat in the style of Trump’s unmistakable ‘Make America Great Again’ tagline that instead read: “Make Racists Catch the Fade Again”.

He said he was “excited about Black Lives Matter”, which he has played a particularly prominent role in promoting since the fatal shooting of Michael Brown by police in his hometown of Ferguson in 2014.

Covington hit back by attending his press duties in a cap that read “Keep America Great”, later accompanying a photo of himself smiling in the outfit with the message: “The face I make when I’m ready to give a domestic terrorist sympathizer a hard lesson in American resolve.”

Trump sparked more outrage earlier this year when he suggested that Antifa, the umbrella organization of anti-fascists involved in many of the social justice and equality protests that have taken place in the US, should be declared a terrorist group.

Woodley said he had made the decision to distance himself from Covington before the fight as a symbol of the need he saw for the UFC to follow governing bodies such as the NBA by taking more of a public stand against social injustice.

Bro what were u tryna do😂😂😂 pic.twitter.com/Ue2F7yJkwF

it’s pretty embarrassing that you went in to kiss his hand and he didn’t let you.

Discussing his admiration for the activism shown by boxing great Muhammad Ali and basketball star LeBron James in the past, he told ESPN that everybody should “calm the hell down a little bit”.

“Let’s listen to somebody else and let’s say, ‘you know what, how much is it going to really hurt me to support this?’ It’s not. All you’re doing is saying, ‘OK, everybody should be treated the same.’

“I wish the UFC would do a little bit more. I’m really not happy with that. I had a long conversation with [UFC president] Dana White about it when the riots happened in Ferguson. I wanted them to utilize me to show a positive spin.”

You heard me @kingjames @nba @mlb YOU’RE ALL SOFT!!! #BackTheBlue🇺🇸🚓🇺🇸

In an Instagram post to his following of more than 447,000 on the anniversary of the September 11 terrorist attacks last Friday, Covington lashed out at Woodley’s idea and called emergency services personnel “real heroes”.

“These are the people who should be looked up to for their courage and bravery,” he insisted. “Not ‘woke athletes’ getting paid millions to play kids’ games.

“These are the same people they want to ‘defund.’ The ones who leave their families at home and go to a job where they willingly run into danger to save others.

“Instead of being honored they are vilified. These are my heroes. These are America’s heroes.”

Covington, who claimed “coward” Woodley had wanted to avoid a pre-fight face-off, was mocked by many for his latest clip with Trump, which included a curious handshake in which he appeared to move the president’s hand close to his own face as he gripped it.

“Why did you go for the hand kiss?” asked one, while another despaired: “So much cringe.”

The Florida-based southpaw is the favorite to win in Vegas on his first appearance since he was stopped last December by Kamara Usman, who also questioned Trump’s slogan and called Covington “entitled”.

Shortly before Covington labeled him anti-American, Woodley published a video urging his Instagram following of more than 1.6 million to “get yo ass up and get out and vote” in the US presidential elections in November.

He lost the title to Usman on a decision the previous March and has fought once since, suffering defeat to Gilbert Burns after going the distance again earlier this year. (RT)