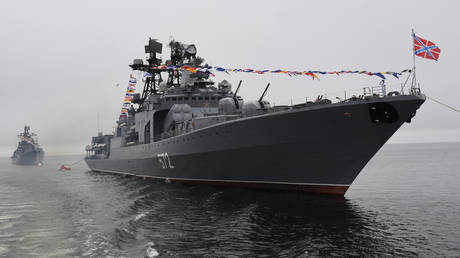 A notorious US naval destroyer sparked a diplomatic incident on Tuesday morning after Russia claimed that it had launched an incursion into its territorial waters.

The USS John S McCain, a specialist combat ship designed to hunt submarines, was operating in the Sea of Japan (also called the East Sea), off the coast of the Russian Far Eastern capital, Vladivostok. Authorities say it was more than two kilometers inside Russia’s internationally recognized maritime border.

A statement from the Ministry of Defense in Moscow said that the vessel had “violated” Russian waters and was “warned of the unacceptability of its actions” by the Udaloy-class destroyer Admiral Vinogradov, which had been tailing it. The communiqué added that sailors had told the American ship of the “potential of resorting to ramming to force the trespasser out of the territory.” The US navy has not yet issued a response. (RT)