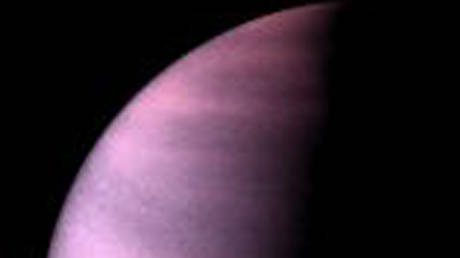 An ultraviolet-light image of the planet Venus, taken by Hubble Space Telescope. ©NASA

Russia, the country with the most extensive record of exploring Venus, is planning a comeback in collaboration with the US. The most exciting outcome would be finding life high in the clouds of its super dense atmosphere.

Between Earth’s two neighbors Mars has been receiving most scientific attention, partially because it’s the better candidate for future manned expeditions and colonization. Venus with its hostile conditions on the surface was given the cold shower with only two non-flyby missions – ESA’s Venus Express and JAXA’s Akatsuki launched since the turn of the century.

Yet Venus may be better than Mars in answering one key question: whether life is exclusive to Earth. Russia, which has the distinction of being the world’s most dedicated explorer of the planet thanks to Soviet Venera and Vega programs, plans to try and find the answer sometime around 2030.

Read more:   CEC Chair: Attempts may be made to intervene in country's affairs through elections

“Life in Venus clouds will be exciting thing to look for. So far, there is no evidence that says it cannot be there. And it will be one of the goals of the mission,” said Lyudmila Zasova of Russia’s Space Research Institute.

Also on rt.com ‘Hellish hot-house’ Venus could have been habitable before major surface devastation – new research

Zasova is part of the team behind the “Venus D” mission, which would be the first one to land on the surface of the planet since the twin Vega landers in 1984. The future mission is to reuse the highly-successful lander design, but plans to improve on the longevity of its scientific payload. (RT)

With masks and gel, Spaniards vote amid new coronavirus outbreaks