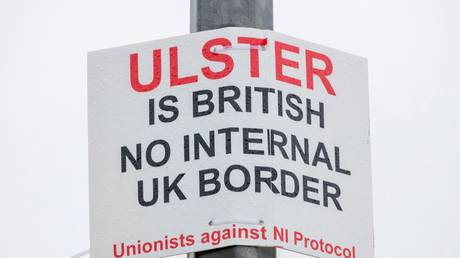 UK Foreign Secretary Dominic Raab has asked for “a bit of respect” for Northern Ireland during tough trade talks. British media claimed earlier that French President Emmanuel Macron hinted that the region was not part of the UK.

The UK media cited government sources saying that Prime Minister Boris Johnson had a bitter exchange with French President Emmanuel Macron over the flow of goods between Northern Ireland and the rest of the UK.

As they met at the G7 summit in Carbis Bay in Cornwall, Johnson supposedly asked Macron how he would feel if French courts stopped him from moving sausages from Toulouse to Paris. Macron was said to have replied that it was a bad comparison because Paris and Toulouse are both part of France – to which Johnson said that Northern Ireland is part of the UK as well.

Read more:   Give the Megan Rapinoe liberal love-in a rest – it's a tiresome distraction from the football

When asked if the description of the dialogue in the media was true, Raab told Sky News’ Trevor Phillips that he would not “spill the beans” on the matter. At the same time, he said that “no one should be surprised by these reports.”

“We have serially seen senior EU figures talk about Northern Ireland as if it were somehow a different country from the UK,” Raab said, calling such an attitude “offensive” and damaging to the communities in Northern Ireland.

Could you imagine if we talked about Catalonia, the Flemish part of Belgium, one of the Lander in Germany, northern Italy, Corsica in France as different countries?

Raab called for “a bit of respect” toward the precarious situation in Northern Ireland since its residents are suffering from uncertainty after Brexit. (RT)