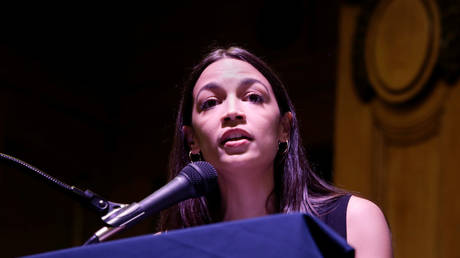 Alexandria Ocasio-Cortez, who represents New York’s 14th congressional district, is facing a new wave of conservative outrage after she appeared to drag the 9/11 issue into the debate about the Trump administration’s zero tolerance policy on illegal immigration.

Speaking at a town hall in Queens on Saturday, Ocasio-Cortez told the crowd that the US is responsible for “lifelong trauma” the now phased-out practice of family separation has caused to the children. She argued that it takes only two days to incur the type of psychological scarring they would be suffering for the rest of their lives.

Noting that not all the children have been reunited and that in some cases parents were deported to third countries while their children stayed in the US, she said that “one of the first things” that should be done “when we elect a Democratic Senate and a Democratic President” is to “convene a special commission” to reunify all the children and investigate how it came to that.

“In the 9/11 commission, they were charged with investigating and making sure they dug out every nook and cranny of what happened and how it happened in our system. And I think that that kind of study is what’s going to be required in order to reunify as many children with their parents as possible,” she said.

She also argued for the creation of a similar commission on Puerto Rico, regarding the aftermath of the devastating Hurricane Maria that crippled its infrastructure in September 2017.

The proposed commissions, she said, will be “charged with doing just as the 9/11 Commission did when they said what went wrong in the 9/11.” (RT)