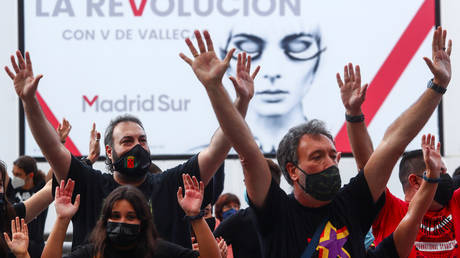 A protest against measures to control the spread of Covid-19 in Madrid. © REUTERS/Sergio Perez

Anti-lockdown protests and violence continued over the weekend in Madrid, as clashes between citizens and police grew increasingly violent. Video shared to social media showcases the increasing violence.

Last week, Madrid city council announced new restrictions for over one million of the city’s inhabitants, introducing localized restrictions on movement amid a surge in new cases of coronavirus.

Dozens of residents were involved in violent clashes with police last week, in what local media dubbed a riot. Eyewitness footage from the scene shows the ferocity of the police response in quelling the disturbances.

In one clip shared to social media, a police officer in riot gear was filmed headbutting a detainee.

Many claim working class and migrant neighborhoods are being stigmatized by the new restrictions as many residents are manual laborers who use public transport to commute to work, in what authorities consider another major viral infection vector.

Over one million people are subject to the new localized lockdown restrictions and may only leave their homes for work, medical or educational purposes and only if they carry supporting documents showing they have the necessary permission.

Some 45 restricted zones were identified due to their higher infection rate, tied to high population density relative to the rest of the city, in which cases currently exceed 1,000 positives per 100,000 inhabitants.

Madrid now ranks top among major European cities for new infections amid the so-called second wave of the 2019 coronavirus.

Local businesses must operate at 50 percent capacity and must close before 10pm. Gatherings are limited to no more than six people. The new measures will be reviewed every 14 days and may be extended on an open-ended basis. (RT)

Kremlin: Karabakh issue should not become an arena for competition between Russia and US

We proved to world that Karabakh is Azerbaijan’s historical land, said President of Ilham Aliyev…

Azerbaijan agreed on a fresh humanitarian cease-fire to exchange prisoners and bodies, but Armenia broke…

All nations in Azerbaijan united and will achieve victory – Mikhail Zabelin

All nations living in Azerbaijan have united and will achieve victory, Head of Azerbaijan’s Russian…

A serviceman of the Azerbaijani Army, Dmitry Solntsev, who was killed in the battles to…

President Aliyev: We are restoring historical justice on the battlefield

“The second Karabakh war has been going on for about a month. This war is…

A mercenary, who came to Nagorno-Karabakh from Germany to fight against Azerbaijan, has been eliminated.…