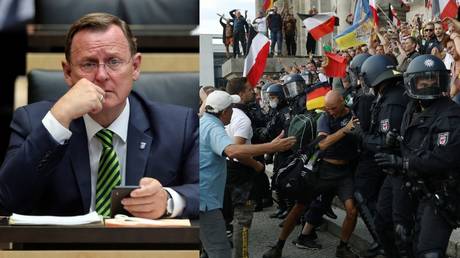 (L) Bodo Ramelow; A group of protesters scuffling with police in front of the Reichstag building during a mass anti-lockdown rally in Berlin in August. ©  Reuters / Fabrizio Bensch;  Reuters / Christian Mang

The massive demonstrations against Berlin’s tightening pandemic control measures are starting to resemble “terrorism,” Ramelow told Tagesspiegel on Thursday, insisting the protests – and the fringe interests they brought together – were “a threat to internal security in our country.”

Ramelow, who is a member of The Left (Die Linke), pointed to a protest in which some marchers carried large photos showing Chancellor Angela Merkel and virologist Dr. Christian Drosten in concentration camp uniforms and chanted for them to be hung from lampposts as evidence the opposition to Merkel’s coronavirus regime was getting out of control.

Especially dangerous has been the way in which the demonstrations bring together far-right “Reichsburgers” (a fringe group of German monarchists) with “lateral thinkers” (Querdenken, a reference to a free-thinker group that has organized numerous protests against lockdowns) and “corona-deniers” with “anti-vaccination activists,” Ramelow continued.

The volatile mixture, he said, was “very dangerous.” He dismissed the notion that Germans would be vaccinated against their will and seemed disturbed that anyone would even consider the idea that Microsoft founder and billionaire vaccine evangelist Bill Gates was “now trying to force-vaccinate us.”

I observe pogrom-like moods in all these networks and conspiracy myths.

In the interview, Ramelow attempted to link last weekend’s arson attack on the Robert Koch Institute, Germany’s federal disease control agency, to the anti-lockdown movement. However, the attackers – who were seen by security guards throwing molotov cocktails at the facility – have not been caught and no evidence has been produced to indicate a political motive. The facility was reportedly targeted with a distributed denial of service (DDoS) attack by hackers several days before the firebombing.

The leftist politician also sought to link the anti-lockdown protesters to a bizarre act of vandalism earlier this month on Berlin’s Museum Island, a crime German media strove to pin on conspiracy theorists and the QAnon movement. Dozens of artworks and artifacts, including a reconstruction of an ancient Greek Pergamon altar, were defaced with an unknown “oily substance.”

Ramelow claimed the beliefs of the anti-lockdown protesters were part of an insidious undercurrent of “irrationalism” which was responsible for wild stories about the island.

Also on rt.com Party pooper: Police in Berlin break up FETISH party for 600 guests amid widening coronavirus crackdown on nightlife

“They say the Pergamon Altar is the Witches’ Sabbath,” the politician pointed out. Indeed, “they” say much more than that – former vegan celebrity chef Attila Hildmann has claimed that the altar is actually the nexus of the “global satanism scene,” even accusing Chancellor Angela Merkel of performing “human sacrifices” on it with her globalist pals. It is unclear how all this is related to the anti-lockdown protests, however. (RT)

The Republic of Azerbaijan has pursued a well-structured agenda of Multilateral Diplomacy. The admirable leadership…

On December 4, at 12:00, a minute of silence was observed across the country to…

With the liberation of Nagorno-Karabakh by the Azerbaijani Army, the corridor between the Nakhchivan Autonomous…

Oil prices rose on Friday, heading for the fifth week of gains after major producers…

Rates for consumer goods such as dairy products, bakery products, and food products have risen…

French MFA: We will not recognize the independence of Nagorno-Karabakh

The French Minister for Europe and Foreign Affairs, Jean-Yves Le Drian, commented today on the…