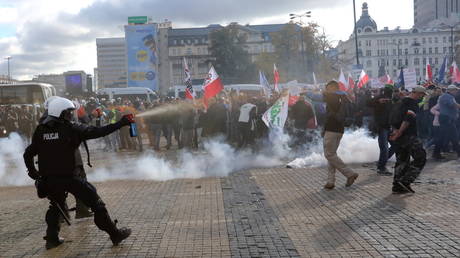 Opponents of tough Covid-19 restrictions and a near-total ban on abortion have rallied simultaneously in the Polish capital. Pro-choice activists promised a nationwide women’s strike next week.

Protesters in Warsaw demanded a “wise and responsible” approach to fighting the coronavirus, which would include the easing of quarantine restrictions and the voluntary self-isolation of vulnerable groups. They also asked the government to compensate businesses reeling from the outbreak. Officials introduced tougher measures against Covid-19 earlier this month, following a spike in cases. 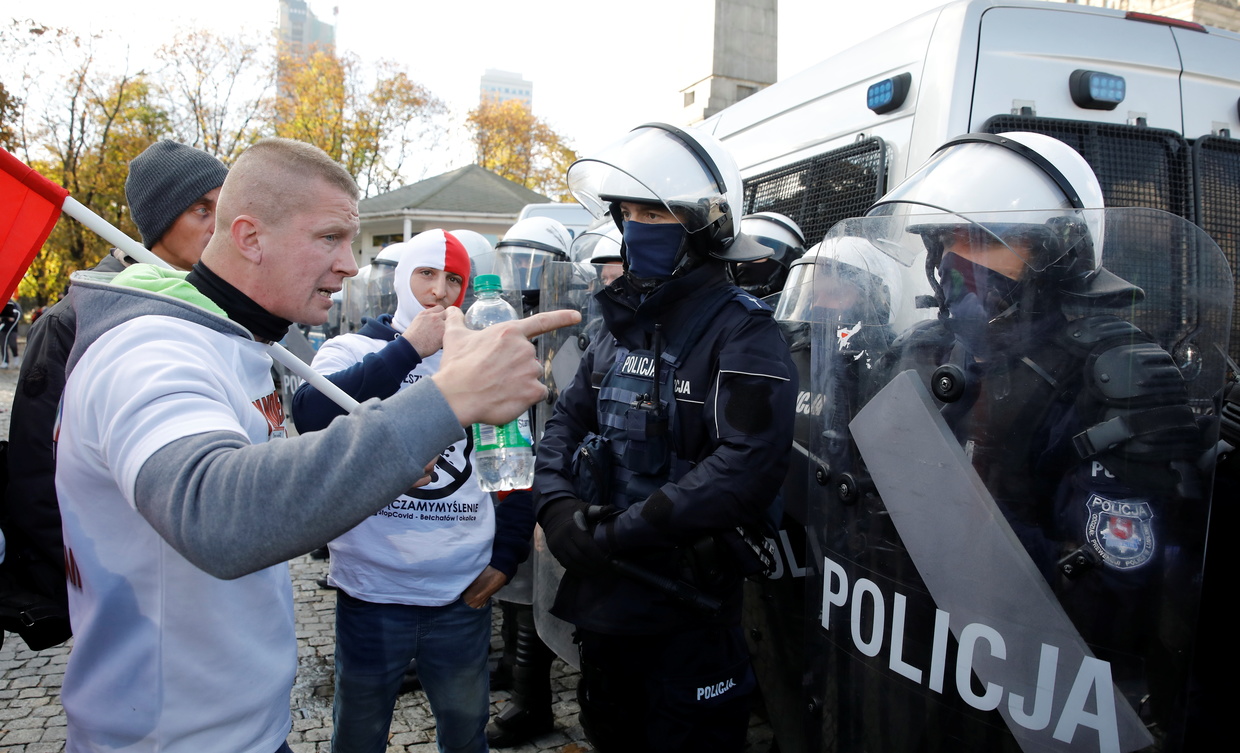 The rally was met with a heavy police presence. Stun guns and tear gas were used to disperse the crowd. According to reports, at least one person was injured in the scuffles and an unspecified number of people were fined for violating public assembly laws. A spokesperson for Warsaw police told local media that the officers were only responding to aggression from the protesters.

Also on Saturday, the activists, many of whom were women, continued marching on the streets of Warsaw and other cities across the country against a recent court decision that severely limits access to abortion.

“Revolution is a woman” ❤#zakazaborcji#piekłokobiet#protestkobiet#girlpower#WomenSupportingWomenpic.twitter.com/jEoyjbG9zS

In the town of Bialystok, people lit candles outside the offices of the ruling conservative Law and Justice party (PiS), while in Wroclaw, activists left coat hangers – the symbol of a life-threatening method of self-induced abortion – on the gate of the archbishop’s residence.

While most of the rallies were peaceful, minor incidents were reported. In the port city of Gdynia, football fans who had joined the protests broke into the office of a local PiS lawmaker, and police used tear gas to drive them out. Protesters also blocked traffic on the roads, and some of the drivers expressed solidarity with their cause.

In Katowice, an opposition MP, Maciej Kopiec, was briefly handcuffed following an altercation with the police. Officers claimed he was detained after kicking a riot shield and refusing to identify himself.

Abortion is a highly contentious issue in Poland – a predominately Catholic state. The country already had one of the most restrictive laws on ending pregnancy in Europe when, on Thursday, a court ruling banned abortions carried out when a fetus is deformed. Now, women can undergo abortions only in the case of rape, incest, or where the mother’s health is at risk.