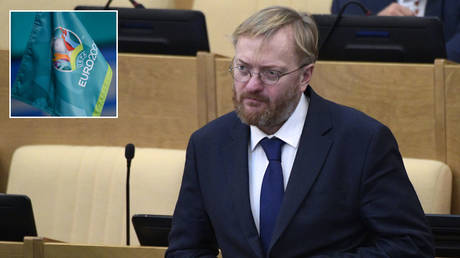 A controversial Russian MP has suggested that Wednesday’s Euro 2020 soccer match between Germany and Hungary should be classified as 18+ because the German goalkeeper will be wearing a rainbow armband to support LGBT+ rights.

The game, which will be hosted in Munich, is due to be shown on Russian state TV.

Speaking in parliament, anti-gay politician Vitaly Milonov slammed Germany’s Manuel Neuer for wearing the rainbow colors in the country’s previous two tournament matches against France and Portugal as a sign of solidarity with the LGBT+ movement. Neuer also wore it in an earlier friendly game against Latvia.

Last week, UEFA – the tournament’s organizers – revealed it would be investigating the use of the armband as a political symbol and, as a result, it was feared that the German national team could be fined. The review has since been halted, however, and Neuer plans to wear the armband on Wednesday evening.

UEFA have today shared with the DFB that they have stopped the review of the rainbow captain’s armband worn by @Manuel_Neuer.In a letter, the armband has been assessed as a team symbol for diversity and thus for a ‘good cause.’ #EURO2020#GERpic.twitter.com/HFiAAQ6F5D

According to Milonov, children watching on television should not be exposed to the rainbow-colored accessory.

“The public display of LGBT symbols during the broadcast of the Germany-Hungary match in our country is unacceptable,” Milonov told parliament. “Obviously, the depiction of Manuel Neuer, who wears this armband, should be avoided in the Russian broadcast.”

“It is even possible that an 18+ age restriction should be set for watching this match,” he suggested.

In his opinion, football has become a tool for propaganda around the globe.

“But the world did not ask for every fan and spectator to become an unwitting accomplice to the legalization of same-sex unions and homosexual promiscuity,” he said. (RT)