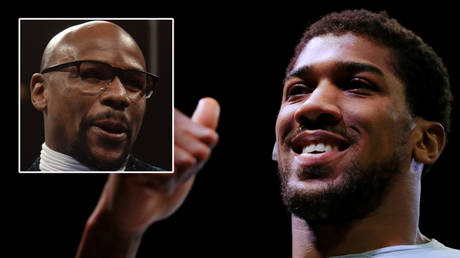 Anthony Joshua could land some top-level training partners ahead of his proposed heavyweight title unification fight against Tyson Fury after saying that input from Floyd Mayweather and Wladimir Klitschko is “always welcome”.

Joshua and Fury, the two fighters who hold all the marbles in boxing’s heavyweight frame, remain in crunch talks ahead of a proposed title tilt between the two Britons this summer.

There have been several hold-ups in arranging the fight since it was first revealed to be in the works almost a year ago, with the latest delay understood to center around a delay in securing a location for the much-anticipated megafight.

Joshua, though, seems to be preparing as if the fight is a certainty to take place amid reports that Saudi Arabia will most likely act as the host – and he has called upon some of the sport’s greats to help him prepare.

There is perhaps no better tutor than one of boxing’s biggest names, the undefeated Floyd Mayweather, who has become a self-confessed fan of Joshua’s in recent times.

“I look forward to working with Joshua real soon – we talk all the time,” said Mayweather of the Watford-born prizefighter to the Disruptive Entrepreneur podcast.

“I met Tyson Fury on a few occasions; he’s great guy and very interesting. After the fight I like to see him sing… I haven’t seen him fight a lot of times.

“I’ve seen him fight twice, against Deontay Wilder, but it’s a very intriguing match-up. You can never say what’s going to happen in the sport of boxing. Both guys are great competitors.”

Should Mayweather be willing to donate his time, Joshua says he will gratefully accept it.

“He’s a great man. To have someone like that with the boxing brain – you need to be around fighters as a boxer,” said Joshua of the 50-0 icon.

“Good boxers need to stay around better boxers in order to get better, so I’d definitely have him.”

Joshua also opened the door to a host of the sport’s top names to guide him in his preparation – including the man he defeated four years ago to claim the heavyweight crown, Wladimir Klitschko.

“And it’s inspiration for the kids in [Joshua’s London] gym as well because this gym is an amateur gym for the community, so yeah it’d be good to have them down here.” (RT)