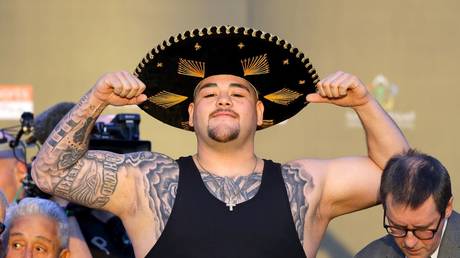 Ahead of the fight of his life on Saturday night against Anthony Joshua, Andy Ruiz has been forced to address concerns about his weight but blames his increased mass on, among other things, the sombrero he wore on the scales.

Ruiz will become the heaviest man to fight in a heavyweight world title fight since 7ft tall Russian Nikolai Valuev when the first bell sounds in Riyadh but has been forced to allay concerns as to his weight after registering a considerable 283lbs during Friday’s weigh-in – some 15lbs heavier than in their first meeting.

However, the Mexican-American fighter isn’t blaming his ballooned weight on any excesses he may have enjoyed since being champion, instead saying that the manner in which the weigh-ins were conducted was the real culprit.

“I already had ate breakfast, lunch and dinner. I had on a sombrero and all my clothes. A lot of people are saying that I came overweight or this and that. We had to wait so long.

“I probably put on like ten pounds just eating and drinking normally today. I would’ve been at like 268 without all that stuff and haven’t had eaten.

I need to hear you say it! Comment “and still” below as many times as you can ⤵️🇲🇽🏆

“If we weighed in at 11am, I definitely would have been less.”

Ruiz’s weight was a major talking point from the moment he tipped the scales, given a pre-fight narrative which suggested that he had actually dropped pounds in advance of the fight.

Former champ Evander Holyfield even went as far as to say that Ruiz’s chances of defending his titles have plummeted because his increased mass will make it more difficult to use the same type of fluid movement he used to such great success against Joshua in their first fight.

“He’s blown it, really. He’s blown his opportunity,” Holyfield told USA Today. “He threw away a great opportunity really because now he can be outboxed.”

Meanwhile, an unseasonable thunderstorm has threatened to run riot over Saturday’s contest which is taking place in a purpose-built 15,000 seater outdoor arena. On average it rains just 17 days per year in the Saudi Arabian capital.

Online reports had even gone so far as to suggest that the rain could place the fight into jeopardy, those these rumors were quickly rubbished by promoter Eddie Hearn who insists that the fight will go ahead as planned. (RT)

Postal service warns of delays in US mail-in vote count