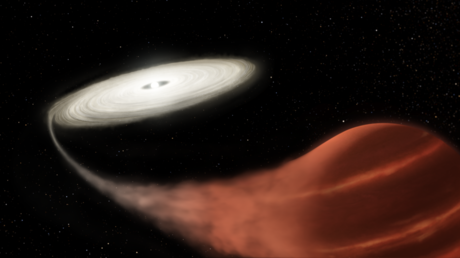 NASA’s planet-hunting Kepler spacecraft has witnessed the remains of an ancient star thirstily draining material from its giant celestial companion, in a remarkable interaction known as a super-outburst.

This star system consists of a ‘White Dwarf’ star with a ‘Brown Dwarf’ companion that’s roughly 10 percent the size of its rapacious neighbour. White Dwarfs are what stars become when they have exhausted their nuclear fuel, while Brown Dwarfs are huge celestial bodies that are larger than the largest planets but smaller than the smallest stars.

The extraordinary event was identified by researchers mining data from the retired Kepler probe, which has scanned space in search of Earth-sized planets orbiting stars. (RT)