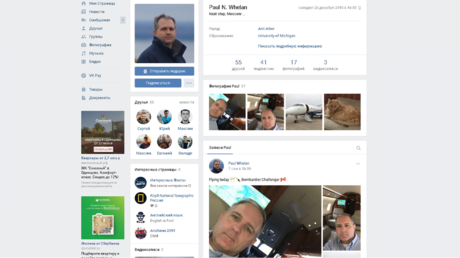 The former US marine detained in Moscow on spying charges had for long been a user of the Russian social media network VK, and almost half of the people he chatted with there seem to have links to the Russian military.

Paul Whelan, who also holds British, Irish and Canadian citizenships, seemed to have a particular penchant for Russia. His account on Russia’s most popular social network, VK, is more than a decade old although he had just 55 friends. But nearly half of them, notably, had either a military education or a history of military service, Reuters reports.

At least 12 of his friends on VK had received military education in Russia, while another 11 apparently had served in the Russian Army, the report says, adding that the list of Whelan’s acquaintances also includes people from the IT, engineering or civil aviation circles.

RT was able to find what appears to be Whelan’s social media account on VK. The social media page contains a handful of images, including some pictures mocking former US President Barack Obama and supporting Russia’s re-unification with Crimea. The page is also filled with short posts in English and Russian, mostly various holiday greetings on occasions ranging from Russia’s Victory Day to Canada Day or Christmas. Several of his posts also seemingly express support for President Donald Trump. 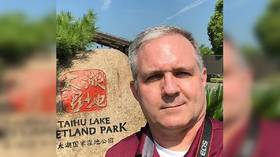 Among his ‘friends’ there are at least half a dozen of graduates of Russian military higher education institutions, including the Russian Defense Ministry’s Military University – one of the leading educational and scientific centers of the Russian Armed Forces. Other educational facilities Whelan’s acquaintances graduated from include several military engineering universities and the Civil Defense Academy of the Russian Emergencies Ministry. There are also several doctors, specialists in civil engineering and construction, as well as in civil aviation and water transport.

Earlier, the Russian KP daily also reported about Whelan’s contacts with Russian military graduates and talked to two of his acquaintances. However, both men said the American never asked them about their education or work but instead talked about the US, his own past and his desire to learn Russian. Most Russian contacts of Whelan, 48, are men in their 20s, and none of them seemed to hold any high ranks in the Russian military.