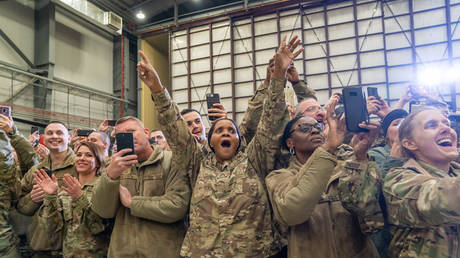 A Reagan Institute survey has found that nearly half of all American military households view Russia as more of an ally than a threat. Pentagon officials reckon they’ve been brainwashed by the Kremlin.

The Reagan Institute’s annual National Defense Survey ranks the attitudes of Americans on all things war, peace, and politics. The latest version, published in October, has more statistics than you could shake a stick at, yet to the Pentagon, one in particular stands out.

46 percent of military households see Russia as an “ally,” while 28 percent of all American households share that belief. China too has overtaken Russia as America’s next top enemy, according to the survey.

The think-tank reckons positive views of Russia are held mostly by Republicans, which could explain the rampant Russophilia in the ranks (America’s men and women in uniform usually vote for the GOP), but the Pentagon’s top brass has other ideas. (RT)