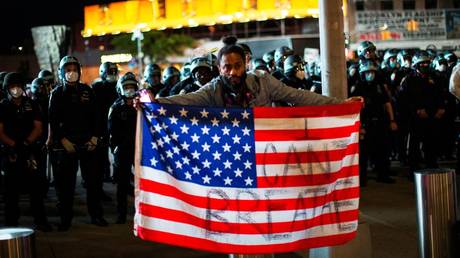 The death of African-American George Floyd at the hands of Minnesota police is a symptom that is sufficiently acute for the US to be diagnosed with “a chronic disease” of racism, China’s foreign ministry has declared.

The running demonstrations demanding justice for George Floyd show “the severity of the problems of racism and police violence in the US,” a spokesman for the Ministry of Foreign Affairs Zhao Lijian told at a regular press briefing on Monday.

Racism itself is “a chronic disease of American society,” Zhao stated, as quoted by AFP.

The Chinese foreign ministry’s take on the case seems to mirror that of their Iranian counterparts, who tweeted a photograph of a black demonstrator valiantly facing down a squad of riot police.

The caption invoked a famous speech by the US civil rights leader Martin Luther King and his declaration that “I have a dream that one day this nation will rise up & live out the true meaning of its creed: ‘We hold these truths to be self-evident, that all men are created equal,’” it reads. (RT)