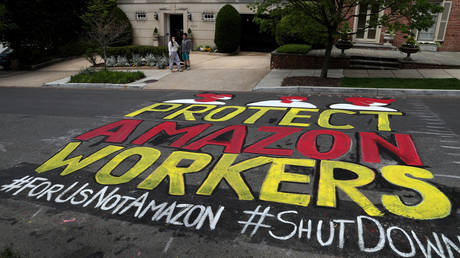 E-commerce giant Amazon has discontinued the $2 wage increase it grudgingly instituted at the height of the coronavirus pandemic, even as employees insist the company must do more – and its CEO sits back to watch his fortune grow.

The online retailer declined to extend its $2 hourly hazard pay bump past the end of May, even though the coronavirus has not shown any signs of vanishing and employees maintain they still fear coming to work, six employees confirmed to Business Insider on Wednesday.

Amazon insists its $15 hourly wage is a leader in the industry, even as the company’s profits explode while Covid-19 lockdowns force people all over the world to do their shopping online.

Also on rt.com Bezos ordered to testify in Congress, as Amazon accused of ‘possibly criminally false’ statements on business practices

“We want the pay until the masks go away,” one worker in Indiana told the outlet, speaking anonymously for fear of retaliation. Amazon has been known to punish employees who go public with complaints about its policies, notoriously firing New York protest leader Chris Smalls after he led a walkout denouncing the company’s unsafe warehouse procedures. Amazon has mandated its employees wear masks since April, even while acknowledging its own supply of the masks was “limited” and recommending employees bring their own.

The Indiana employee noted “almost everyone is very disappointed and angry,” revealing the warehouse where they worked has more than 30 confirmed cases of coronavirus. One of workers’ foremost concerns is the lack of communication about those cases – while upwards of 100 Amazon warehouses have reported at least one case, those reports may come as late as a month after diagnosis, and rarely specify the department or shift of the infected worker. As a result, fearful employees are kept guessing, jumping out of their skin when they hear a cough on the warehouse floor. At least eight employees had died with the virus as of last month, even as Amazon refuses to release how many have tested positive for Covid-19.

While some employees said the $2 hourly bonus would make little difference in their own lives, they understood not everyone was in their position. “There are others… who can really use it and with the present circumstances they should actually be increasing it instead of taking it away,” one New Jersey warehouse worker said. A South Carolina employee agreed, arguing the company “cares nothing about what a pay cut will do to morale” and reasoning that workers would have been better off if Amazon had simply shut down warehouses to protect staff, allowing them to claim unemployment benefits the government has bolstered amid the pandemic.

Despite countless strikes and demonstrations of employee unrest over the past few months, Amazon continues to portray itself as an industry leader in worker protections, bragging that “we’ve paid our team and partners nearly $800 million extra since Covid-19 started while continuing to offer full benefits from day one of employment.” Claiming that “our minimum wage is more than what most others offer even after their temporary increases in recent months,” an Amazon spokeswoman told Business Insider the company had gone forward with stripping workers of their hazard pay because “demand” had “stabilized.”

The megacorporation found itself in hot water last month after nearly a dozen local TV stations ran near-identical pro-Amazon news segments scripted by the company’s PR team. The programming stressed Amazon’s care for the safety of its workers, but wasn’t labeled as advertising and was widely denounced as a ham-handed attempt at damage control following nationwide strikes and an outcry over the company’s prioritization of profits over people. (RT)

On July 4, Spain reopened its borders to visitors from 12 non-EU countries. The 12…

The NEOWISE comet has just passed so close to the Earth, it has been seen…

Amid a new surge in coronavirus cases in Iran, at least five members of the…

Spain’s northeastern Catalonia region on Saturday locked down an area with around 200,000 residents near…

A Dutch court investigating the downing of MH17 has agreed to hear from Almaz-Antey, a…