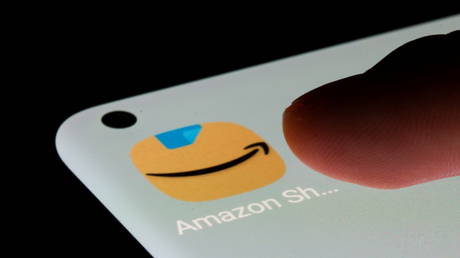 The Amazon app is seen on a smartphone in this illustration taken July 13, 2021 © Reuters / Dado Ruvic

Amazon has been handed an $888 million fine by European Union regulators for breaching the bloc’s data protection laws. The fine is the largest issued by the EU, but is still less than one percent of the firm’s annual revenue.

The Luxembourg National Commission for Data Protection (CNPD) issued the fine earlier this month, and Amazon reported it on Friday in a filing to the US Securities and Exchange Commission (SEC).

The CNPD issued the fine claiming that Amazon had processed customer data in violation of the EU’s General Data Protection Regulation (GDPR), a tough privacy law that took effect in 2018. Amazon disputed the fine, calling it “without merit,” and stating that the firm would “defend ourselves vigorously in this matter.”

“There has been no data breach, and no customer data has been exposed to any third party,” Amazon added in a statement. “These facts are undisputed. We strongly disagree with the CNPD’s ruling.” (RT)