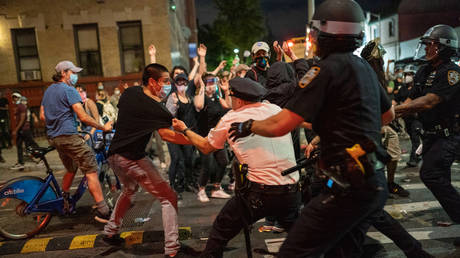 Protests against the death of George Floyd, in the Brooklyn borough of New York City, US, on May 30, 2020. ©  Reuters / Jeenah Moon

Hundreds of cities and towns across the US have seen people hitting the streets to join anti-police-brutality protests sparked by the death of George Floyd. Yet, as tensions ran high, many rallies turned into nightmarish riots.

America has once again been gripped by massive protests as the Black Lives Matter movement seemingly regained momentum following the death of another African American at the hands of the US police. The man was choked to death by a police officer during detention in Minneapolis last week. An independent autopsy confirmed that the man’s death was a result of asphyxiation.

A total of some 400 cities in all 50 US states – as well as in the territories of Guam and North Mariana Islands – witnessed protest actions over the weekend. And even though most of the rallies were peaceful, some American cities turned into real riot hotspots as angry crowds attacked police officers, who responded by firing tear gas and rubber bullets at protesters.

Chicago in particular turned into a battleground over the weekend, with the demonstrations beginning on Friday and eventually transforming into violent riots by Saturday. Rioters were smashing windows and vandalizing buildings as well as looting shops. More than 130 police officers were injured as a result of clashes and almost 700 looting arrests were made on Sunday alone. Illinois Governor Jay Robert Pritzker also summoned the National Guard to put the situation in downtown Chicago under control.

Read more:   Covid-19: Latest on the spread of the coronavirus around the world

New York has become another epicenter of riots that saw demonstrators throwing bottles at police as well as attempting to torch police cars, including with Molotov cocktails. On several occasions police cars were also filmed ramming crowds, incidents that resulted in some injuries. Hundreds of demonstrators were arrested, including mayor Bill de Blasio’s own daughter, Chiara. (RT)