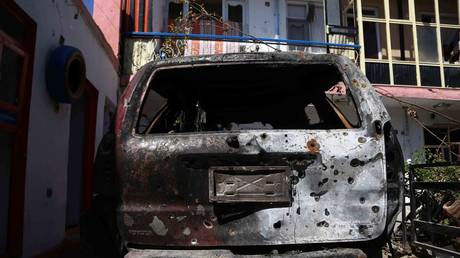 The site of a US drone strike that killed 10 civilians, including seven children, is seen in Kabul, Afghanistan, September 18, 2021. ©  Global Look Press / Xinhua / Saifurahman Safi

The US is admitting error by offering compensation for the lives of innocent children killed by a drone strike in Kabul, but no amount of money will ease their family’s pain, the aggrieved brother of one of the victims told RT.

Not a single terrorist was hit, but seven children – some as young as two – as well as three adults, perished in the charred ruins of their own family’s backyard. In a cruel twist of fate, Zemari Ahmadi, the man whom the US intelligence somehow took for a terrorist preparing an attack, turned out to be a long-time employee of a California-based NGO that distributed food to malnourished Afghans, while another victim was later reported to have worked as a translator with US forces. RT interviewed some of the surviving family members in wake of the strike.

Also on rt.com ‘They attacked us & killed our children’: Grieving Afghan fathers demand fair investigation of US drone strike in Kabul (VIDEO)

Faced with mounting questions about the glaring mismatch of the Pentagon’s narrative with the reality, the US military was forced to admit the operation’s failure. Eventually, an unspecified financial compensation was offered to the victims’ relatives. US Defense Secretary Lloyd Austin has made a “commitment” to the Ahmadi family for compensation, including “ex gratia condolence payments” and State Department assistance in relocating family members to the US, Pentagon spokesman John Kirby revealed last week.

Read more:   How should you talk to people who believe conspiracy theories? - iWONDER

However, the offer of payment was apparently the closest Washington got to a personal apology, which Ahmadi’s relatives say they are yet to receive.

“We would accept [an apology] in case they contact us, apologize and admit that our family is innocent,” the brother of the murdered aid worker, Emal Ahmadi, told RT on Wednesday.

Yet no amount of aid could rectify the tragic events, which have turned the surviving family’s life into misery. “Each day and each moment after that attack, we are constantly feeling pain when we think of those elder or a minor who was killed,” Ahmadi said. He did not directly confirm or deny whether he would accept the American compensation.

Read more:   Currency reserves of Azerbaijan's Central Bank up in 2019

Apart from Zemari, the strike also claimed the life of Emal’s own daughter, Malika, who was just two years old. She died alongside another toddler, Sumaya Yousoufi, who was also two.

“Each day after that attack, our life is getting more and more miserable. Day and night, we recall our memories with our brother and our children, we miss them a lot, the life is hell without them,” Emal said in emotional interview, adding that no compensation could ever change that.

“Compensation is not a remedy to the pain inflicted to us; it is a known fact. It can’t replace the loss of my family, my brother, my own daughter and nephews, who have lost their lives, compensation will not bring them back to life.”

Even if the US decided to pay the family “the whole of their wealth” it would still change nothing, the aggrieved father said. He added that his family does not ask anything of the US other than “to investigate thoroughly before such drone attacks in the future.”