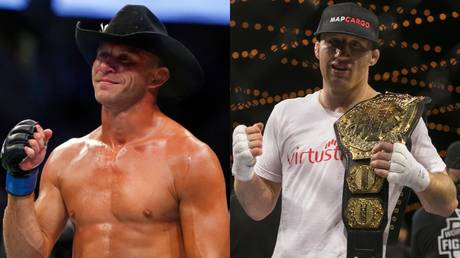 Top ranked 155lb fighters Donald ‘Cowboy’ Cerrone and Justin Gaethje have agreed to a September tussle which will have title implications in the talent-rich UFC lightweight division, per reports from US media.

US outlet MMA Junkie have “confirmed with a person close to the situation” that Cerrone and Gaethje will meet at UFC on ESPN+ 16 event in Vancouver, Canada on September 14 in a fight which promises to be a “Fight of the Year” contender, as well as shedding some light on the potential next move of former UFC double champ Conor McGregor.

Cerrone and Gaethje, listed 4th and 5th respectively in the official UFC rankings, are known for their aggressive styles. “Cowboym,” a vicious Muay Thai stylist, was disappointed in his most recent bout against perennial contender Tony Ferguson, losing after the end of the second round after the (generally even) fight was called off by doctors after he suffered a grotesque swelling around his eye.

Read more:   Indonesia to return 49 containers of waste to Europe, US

Gaethje, too, has garnered a reputation for rarely taking a backward step in the octagon. Through 22 career fights he has gone to decision just three times, preferring instead to roll the dice and hope for the knockout which, more often than not, comes eventually.

Just got off the phone with my ole Buddy. And at 155 it’s kinda are only option. He told me Cowboy let’s go make this money. And if I can Promise y’all something this is a fight y’all Do Not Want to miss. O and of course it’s on short notice @khimanagement @ignite

Conor McGregor, absent from the cage since an October 2018 defeat to Khabib Nurmagomedov, had been linked with comeback bouts against both of these fighters, but a hand injury suffered by the Irishman in training is understood to have delayed his return to action – potentially until a winner of Cerrone and Gaethje emerges. (RT)