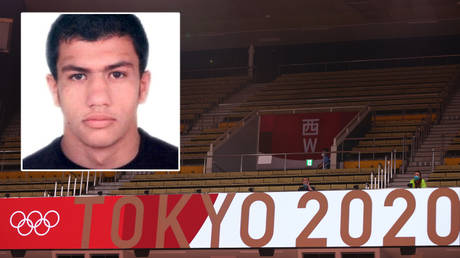 An Algerian judoka who withdrew from the Olympics because his political support for Palestine meant he did not want the prospect of facing an Israeli has been suspended, with judo chiefs citing discrimination and “principles”.

Judo star Fethi Nourine pulled out of the men’s 73kg event to dodge a potential meeting with Tohar Butbul, of Israel, in the round of 32, calling the draw a “shock” and “thunder”.

The Tokyo hopeful claimed he did not want to “get his hands dirty”, while his coach, Amar Ben Yaklif, described a possible match-up with Butbul as “unlucky”.

International Judo Federation (IJF) bosses have now temporarily suspended Nourine and Ben Yaklif, explaining in a statement that “no kind of demonstration or political, religious or racial propaganda is permitted in any Olympic sites, venues or other areas”.

“We worked a lot to reach the Olympics…but the Palestinian cause is bigger than all of this”Algerian judoka Fethi Nourine has withdrawn from the #Olympics after a possible match against an Israeli opponent.#Tokyo2020#TokyoOlympics#FreePalestinepic.twitter.com/UOvZQ8xCOd

The federation’s Disciplinary Commission and the National Olympic Committee of Algeria could now impose further sanctions on the pair, according to reports.

“Judo sport is based on a strong moral code including respect and friendship, to foster solidarity,” continued the statement.

“We will not tolerate any discrimination, as it goes against the core values and principles of our sport.”

Nourine had been due to take on Sudan’s Mohamed Abdalrasool in the first round on Monday, when a victory would have earned him an encounter with Butbul courtesy of a first-round bye for the Israeli.

Algerian judoka Fethi Nourine has been temporarily suspended by the IJF for refusing to face an Israeli opponent.”My position is consistent on the Palestinian issue, and I reject normalization, & if it cost me that absence from the Olympic Games, God will compensate,” he said. pic.twitter.com/vRAK0EOyBu

Ben Yaklif insisted that he had “made the right decision” with his athlete, but the Algerian Olympic Committee now intends to send Nourine home.

Politically-motivated conflicts involving Israeli athletes are not entirely uncommon at the Olympics. Egypt’s Islam El Shehaby quit the sport at the 2016 edition in Rio after shunning the opportunity to shake hands with his victorious Israeli rival.

The IJF handed Iran a four-year suspension earlier this year after ex-world champion Saeid Mollaei claimed he was ordered to lose a semi-final match at the 2019 World Championships in order to ensure he did not face an Israeli in the final.

Nourine chose to withdraw from the same tournament rather than meet Butbul. (RT)