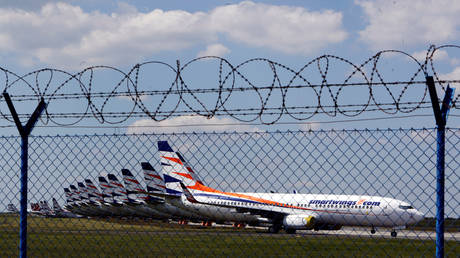 International carriers which have been suffering massive losses due to the coronavirus crisis are massively cutting their workforce, leaving thousands without jobs. More cuts could come as the prospects for a quick recovery fade.

Europe’s top airlines said they would have to ax tens of thousands of jobs in order to cut costs because of the rapidly deteriorating medium-term outlook for aviation. According to the general secretary of the British Airline Pilots’ Association, Brian Strutton, aviation workers face a “tsunami of job losses.”

Ryanair, Lufthansa, British Airways, Scandinavian Airlines, and Air France-KLM could shed as many as 32,000 jobs among them. The Irish discount carrier Ryanair will cut 3,000 jobs and keep 99 percent of flights grounded through June, adding to a mounting employment toll that includes 12,000 cuts at British Airways and 5,000 at SAS AB.

EasyJet announced on Thursday it will cut up to 30 percent of its workforce and reduce its fleet, with CEO Johan Lundgren saying these were “very difficult decisions.”

“We want to ensure that we emerge from the pandemic an even more competitive business than before, so that easyJet can thrive in the future.”

Europe’s largest airline, Lufthansa, which has agreed to a €9 billion state bailout, is still preparing to cut 18,000 jobs. The German carrier has already requested or plans to request short-time work for 87,000 of its 135,000-strong workforce.

Richard Branson’s Virgin Atlantic plans to cut more than 3,000 jobs to mitigate the impact of the Covid-19 crisis.

European low-cost airlines are also pressuring airports which have been left deserted to slash charges in return for resuming flights. Wizz Air, Ryanair, and EasyJet have reportedly demanded long-lasting fee discounts or waivers from airports.

Ryanair said it “will prioritize those airports who agree the following load factor/cost measures,” before requesting a “100 percent waiver” on fees until October and deep cuts extending another year. 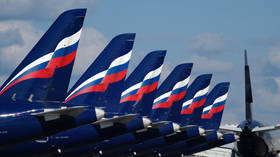 EasyJet invited airports to make Apprentice-style pitches during 20-minute Skype sessions held recently “to discuss how you can and will support easyJet to restart operations.” The company said: “We request that you present to us your best offer, which will strongly influence how we deploy capacity.”

While the pandemic has led to a 96 percent plunge in air travel within the United States, the nation’s airlines are not allowed to implement any layoffs as a condition of their $25 billion bailout package. However, the ban only runs until September 30. (RT)

US: Child killed during a shooting at Alabama mall

The girlfriend of Donald Trump Jnr, the US president’s eldest son, has tested positive for…

British MoD taught Saudi troops how to ‘stay popular with the press,’ as 100s trained in UK last year – report

Amid the Saudi-led military campaign in Yemen, some of its soldiers were taught in the…

Global coronavirus cases have exceeded 11 million, according to a Reuters tally, marking another milestone…