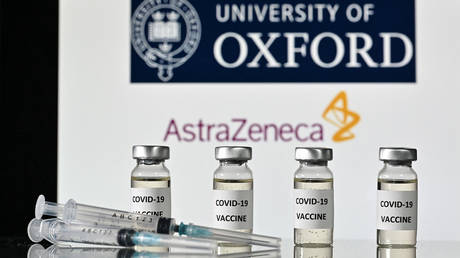 An illustration picture shows Covid-19 Vaccine syringes, with the logo of the University of Oxford and AstraZeneca © Justin Tallis / AFP

The first shipment of Indian-made doses of the Oxford/AstraZeneca Covid-19 vaccine has arrived in Ukraine, ending months of waiting after Kiev failed to obtain jabs from the West. The country’s inoculation program has now begun.

According to President Volodymyr Zelensky’s website, Deputy Health Minister Viktor Lyashko informed the head of state that the vaccine was registered in the country a day before half a million doses arrived at Kiev’s Boryspil Airport from India, where they are being produced under license from AstraZeneca with the name “CoviShield.”

The vaccination program will begin with doctors and then be expanded to include military personnel and members of the National Guard. The first jab was administered at midday Wednesday, with an emergency room doctor from the country’s central Cherkasy region being the lucky recipient.

The first phase of #COVID19 vaccination with a quality vaccine will begin this month. It will be provided to doctors, military, National Guard. The program covers at least half of the population of #Ukraine during 2021 and early 2022. #Ukraine30_covid#forum_ukraine30

On Tuesday, Zelensky revealed that vaccination should begin as soon as possible.

“But it should be voluntary – no one should be forced. It is better to inform people in detail about the proper quality of the drug,” the president said.

The Oxford/AstraZeneca jab has already been approved by the World Health Organization for emergency use and has been rolled out in the UK, the EU, and India.

In the last six months, Kiev has tried in vain to obtain Covid-19 vaccines from the West. With the US banning the export of doses and the EU struggling with its own shortage, Ukraine has looked elsewhere. (RT)