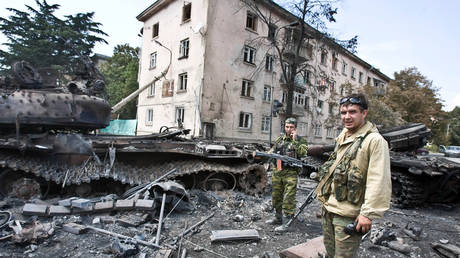 FILE PHOTO: South Ossetian militia in the city of Tskhinvali, which was attacked by Georgian troops. © Sputnik / Maxim Avdeev

After 12 years of legal proceedings, the European Court of Human Rights has ruled that Russia cannot be held responsible for incidents that occurred during the 2008 war in South Ossetia and Abkhazia, rejecting Georgia’s claims.

On the night of August 7, 2008, Georgian forces started shelling the breakaway region of South Ossetia, where Russian peacekeepers were stationed. In response, the Russian military entered the area.

Meanwhile, another breakaway region of Abkhazia announced a mobilization, fearing a renewal of fighting with Georgia. After five days, then-President Dmitry Medvedev announced that the operation had been completed. (RT)

18:13 Macron says France’s Covid curfew in place for another ‘4 to 6 weeks’ as contagious UK variant accounts for more half of all cases