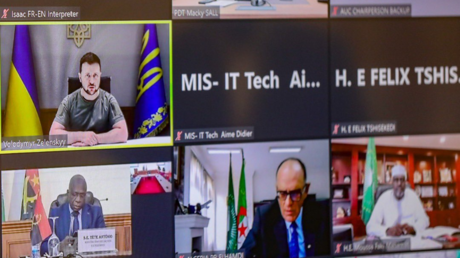 Only four out of 55 leaders reportedly listened to President Zelensky’s virtual address to the African Union © Twitter / Macky Sall, President of Senegal

Just a handful of African heads of state tuned in to personally listen to Ukrainian President Volodymyr Zelensky as he accused Russia of holding their continent “hostage,” amid ongoing Western attempts to pin the blame for the global food crisis solely on Moscow.

Few details emerged from Zelensky’s virtual meeting with the African Union, held behind closed doors on Monday, more than two months after the Ukrainian leader first tried to arrange a conference with the continent’s leaders. Out of 55 nations only four were represented by heads of state, while the rest sent subordinates, according to the BBC. However, Le Journal de l’Afrique claimed only a handful of ambassadors and ministers were actually present.

Read more:   Algerian protesters march on in defiance of 'The Power'

“They are trying to use you and the suffering of the people to put pressure on the democracies that have imposed sanctions on Russia,” Zelensky told the African Union representatives, adding that “Africa is actually a hostage… of those who unleashed war against our state.”

Following the conference call, the President of Senegal and AU Chairperson, Macky Sall, indicated that Africa’s position of neutrality over the conflict remains unchanged. Roughly half of African states refused to support the UN General Assembly’s resolution to condemn Russia’s actions in Ukraine, and no country on the continent has so far joined the sanctions.

Ukrainian president @ZelenskyyUa addressed the @_AfricanUnion Assembly today. We reiterated the AU position of the urgent need for dialogue to end the conflict to allow peace to return to the Region and to restore global stability. pic.twitter.com/1RaIIp2UbC

“Africa remains committed to respect for the rules of international law, the peaceful resolution of conflicts and freedom of trade,” he said in a tweet, thanking Zelensky “for his friendly address to the virtual meeting of the AU Extended Bureau.” (RT)