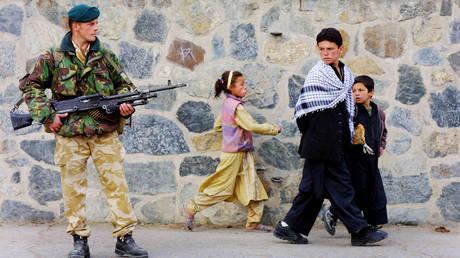 Local interpreters who worked with British troops in Afghanistan are questioning the lack of rescue action by London to help them escape, as other nations successfully carry out ‘mercy flights’ from Kabul.

“Each week Afghanistan becomes more dangerous, more of those who worked for foreign forces are being found and punished. One day it will be our turn. We can’t be lucky forever,” interpreter Hussain, 48, told the Daily Mail.

When Western troops left the country in late August, local staff who had worked for them were forced into hiding. Yet, many of those who had aided British soldiers have reportedly been receiving only messages calling for patience and no clear time frame in which they can expect to be flown out of Afghanistan.

Also on rt.com ‘I lost hope, I lost everything’: Former Afghan interpreter left behind by UK speaks to RT

Now those helpers are growing increasingly desperate as London drags its feet on flying them out of the Taliban-ruled country.

According to the Mail, the government is asking those in need of help to “please continue to remain patient and stay safe until the evacuation call up occurs” – a message that apparently doesn’t sound too reassuring to former interpreters, many of whom have received death threats.

Interpreter Aziz, 40, told the Mail that he and other British-affiliated interpreters “feel forgotten” by the UK government and that “time is running out” for them. Despite being cleared to come to Britain, Aziz is still unable to leave Afghanistan.

To add insult to injury, British-affiliated translators have seen their fellow colleagues who had worked for the Americans board nine consecutive evacuation flights since August 31, all arranged by Washington. But the staff who aided British forces say there was no room for them on those aircraft.

Meanwhile, under pressure from veteran organisations at home, Washington has planned more evacuation flights, which are expected to take place by Christmas. However, the UK government has not officially announced any similar plans, issuing reassurances with no concrete time frames instead.