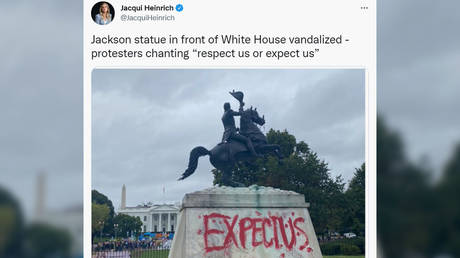 A statue of seventh US President Andrew Jackson that stands outside the White House was vandalized by activists on Indigenous Peoples’ Day, with the words “expect us” spray-painted in red onto its plinth.

Indigenous activists protested President Joe Biden’s administration outside of the White House on Monday, where they called for greater protections for the environment and an end to the use of fossil fuels.

On the same day, a statue of former Democratic President Andrew Jackson – which sits directly opposite of the White House – was vandalized with red paint. The words “expect us” were sprayed onto the side of the statue, along with red handprints, and protesters also reportedly chanted “respect us or expect us!”

Jackson statue in front of White House vandalized – protesters chanting “respect us or expect us” pic.twitter.com/ifj1UG6I3w

The Indigenous Environmental Network (IEN) took credit for the vandalism, claiming in a statement that the graffiti was a “message” specifically for Biden and that the red paint was meant to symbolize blood “to represent the Missing and Murdered Indigenous Women epidemic all over the statue of the genocidal President.”

Read more:   Georgian expert: If we are jealous of Azerbaijan, we should not reject the Chinese vaccine

The group said the action comes on the heels of “900 water protectors and land defenders arrested trying to stop Enbridge’s Line 3” – a planned pipeline expansion from Canada to the US. The statement warned Biden that indigenous Americans “are older than the idea of the United States of America” and they “will continue to fight for the natural and spiritual knowledge of our Mother who sustains our life-ways.”

“We carry the prayers and intentions of our ancestors and are unafraid,” the IEN concluded. “Another world is possible, may all colonizers fall.”

On Twitter, the group boasted that the statue had been “redecorated.” (RT)