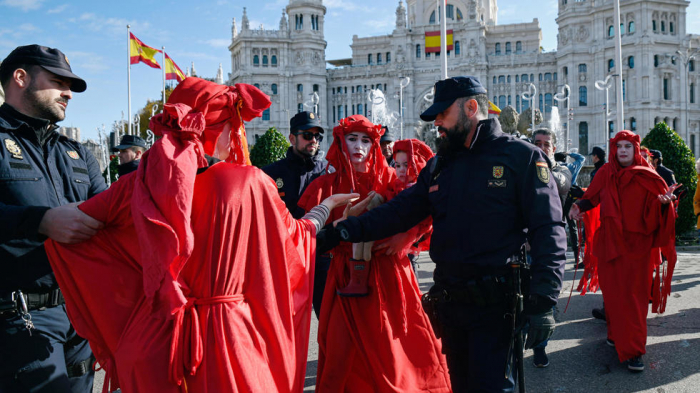 Thousands of activists from around the globe will simultaneously hit the streets of Madrid and Santiago on Friday to demand urgent action on the climate crisis from world leaders attending the COP25 summit, according to AFP.

The main march will take place in Madrid on the sidelines of the UN climate conference, with a simultaneous rally in the Chilean capital, which had been due to host the 12-day gathering but was forced to pull out due to massive protests.

The COP25 opened on Monday with a stark warning from the UN about the “utterly inadequate” efforts of the world’s major economies to curb carbon pollution, with protesters due to deliver their own message when the march begins at 1700 GMT.

Under the slogan “The world has woken up to the climate emergency”, tens of thousands of activists are expected to join the five-kilometre (three-mile) march from Atocha train station which will feature a significant number of Chilean groups.

Teen eco-warrior Greta Thunberg was also expected to join the rally after making a nearly three-week journey across the Atlantic by catamaran.

Famous for galvanizing a generation of youngsters to fight for the environment, the 16-year-old Swede, who refuses to fly by plane, had been en route to Chile when the venue was changed, forcing her to hitch a ride across the US and back to Europe.

Oscar-winning Spanish actor Javier Bardem, a vocal environmental activist, will also be at the protest, which will feature speeches, music and cultural performances.

“We know it will be massive, we hope there will be hundreds of thousands of people in the street demanding urgent action,” march spokesman Pablo Chamorro told reporters.

“2019 has, without doubt, been the year in which people have woken up about the climate.”

“I come from Chile, a country where an avocado tree has more right to water than a person,” she told reporters.

The furious protests gripping Chile over social and economic inequality were “directly related to the environmental crisis”, she said of the most severe wave of unrest since Augusto Pinochet’s dictatorship ended nearly 30 years ago.

“Today, climate action means social equality, it’s not possible to have social equality without environmental equality,” she said. “Speeches are not enough, we need concrete actions that target climate ambition that will resolve these problems.”

SCAC has been the driving force behind a week-long Social Summit for Climate Action, which begins on Saturday and runs parallel to the COP25, involving hundreds of events, lectures and workshops.

Indigenous groups will also have a visible presence, with Juan Antonio Correa of the Minga Indigena collective saying their lands and peoples were “the first to be affected by climate change”.

“Our traditional and historic practices and the relationship that indigenous people have with Mother Earth is an alternative and a way in which modern society can face up to the climate crisis,” he said.

“We are trying to engage and bring about concrete actions to improve the situation for everyone, not just for indigenous peoples but for all of society.”

In their manifesto, groups involved in the march address a clear message to the decision-makers from the nearly 200 countries attending the UN summit that began on Monday.

“We demand that governments participating in COP25 recognise the current climate inaction and state that the insufficient ambition of their agreements will lead the planet to a disastrous global warming scenario,” they wrote.

Addressing the nations that signed the 2015 Paris Agreement, they said it was “irresponsible” that just a year before the treaty becomes operational, there was still no “emissions reduction plan that is compatible with scientific estimates”.

“We return to the streets.. demanding real, ambitious measures from the politicians from all around the globe meeting for the COP25.”